On September 1st William and I flew into Fresno California, rented a car, and drove out to Morro Rock Beach just north of LA to start our drive along the Pacific Coast Highway.  We had several appointments along the way that we had to meet so although a bit rushed this drive would still prove to be a very memorable trip.

The rock is an ancient volcanic plug formed by magma standing 581-foot out of the water.  The size of the rock made it quite impressive as the beginning of our drive.  The beach was filled with surfers.

We spent an hour or so enjoying the beach and just taking a break from the drive down from Fresno.

Then we went down to the harbor, enjoyed the views of the rock, and had our first taste of halibut fish and chips. 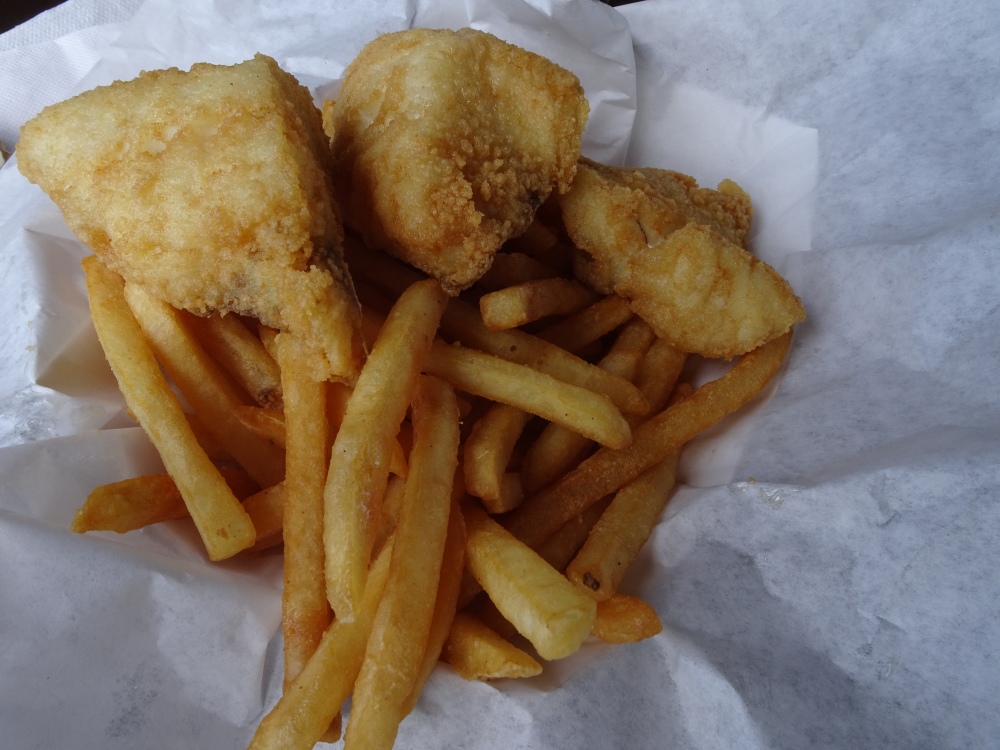 Our next stop was only 30 minutes north of Morro Bay at the Hearst Castle.  The National Landmark in San Simeon, CA  was built between 1919 and 1947.  The Castle sits on 40,000 Acres of land along the Coastline which was originally used for camping and vacations for the Hearst family when William was just a young boy.   It was the dream of the Publishing Tycoon William Randolph Hearst and within a few short months after his Mother’s death in 1919 he commissioned his designer Julia Morgan to build “something a little more comfortable” on the hill. 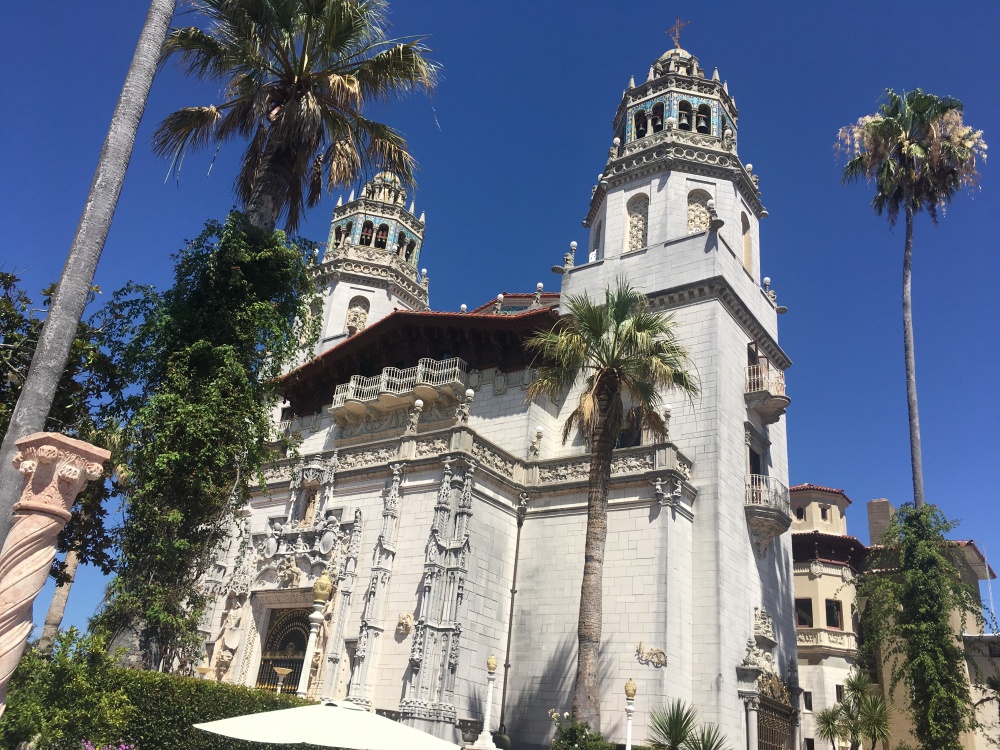 The Castle sits high on the mountain top and the drive up to the Castle took about 15 minutes before we arrived for the beginning of our guided tour.

Hearst began to conceive of making the Castle a museum of the best things that he could collect.  I found it interesting that it cost $6 million to build the Castle and over $3 million for the artworks.  William and I loved visiting the Castle as we love traveling Europe and we could see so many of the same types of architecture and art through out the castle.

Here is a 2000 year old Greek grave stone that sits just at the entrance to the Castle.

Since we had just toured the National Museum of Art in Cairo, Egypt I couldn’t help but smile when I saw the 3000 year old Egyptian Art Hearst had collected and brought here to the Castle in California.

I loved the Spanish ceilings and fireplace from France.

The 16th and 17th century tapestries reminded me of Bayeux, France.

The dining room was unbelievable.  Notice all the silk racing flags and again a Spanish type ceiling.

And here of course is a Virgin Mother and Child at the front entrance.  The whole tour was like seeing Europe all over again. 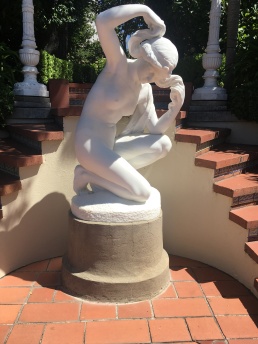 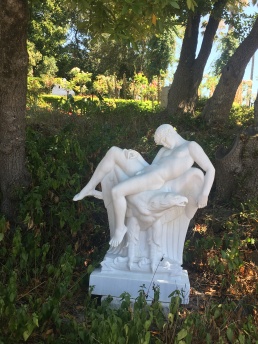 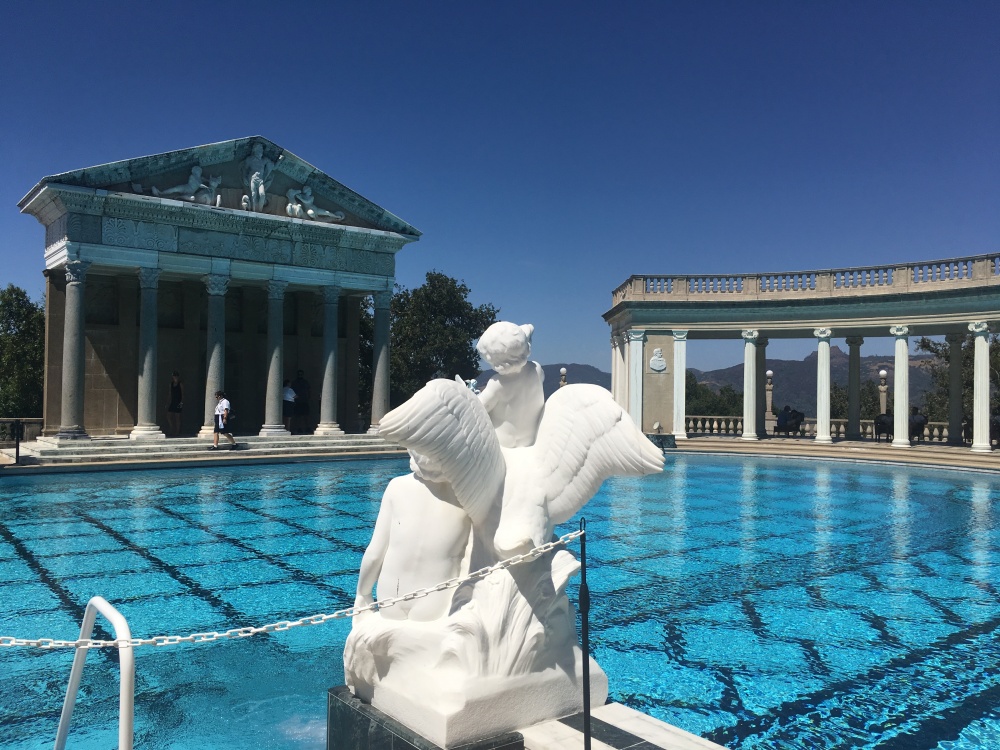 This is the indoor pool.

And of course a tennis court – with a view! 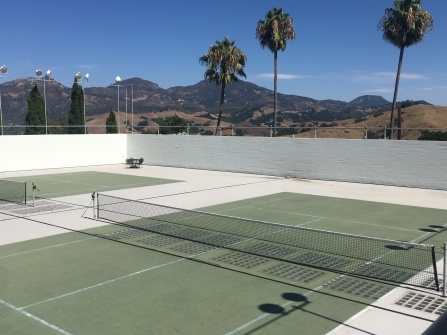 And no Castle is complete without pool tables.  Notice there are no pockets on the front table. 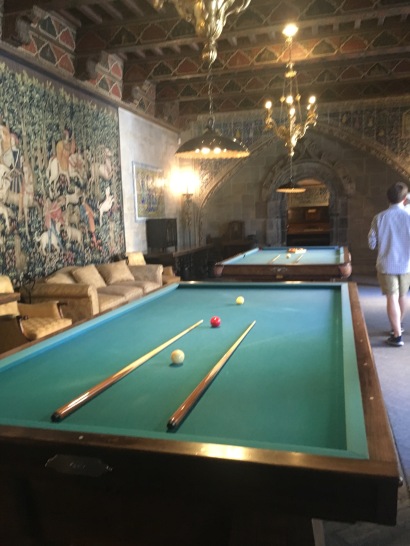 This is just a very small sample of Hearst Castle but enough to show that is a must do when traveling Highway 1.   Even on our tight schedule we had time to do the guided tour.

Just a few minutes from Hearst Castle we made a stop at the Elephant Seal Vista Point.  The Elephant Seals are much larger than the Sea Lions.  Unlike the Sea Lions they do not bark but just lie on the beach and flip sand over their bodies, I assume to cool themselves. 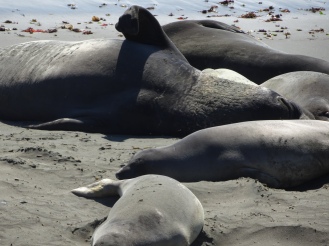 Our first scheduled meeting was here at Treebones Resort in Big Sur.  About 13 years ago in 2007 I built a Pacific Yurt as my primary residence and even before I moved in my daughter Melissa and I started dreaming of making a Yurt Resort in our North Carolina Mountains.  It was Treebones that inspired us so during this drive up Highway 1 William and I would spend the night there and have the opportunity to meet the owners, John and Corinne Handy. 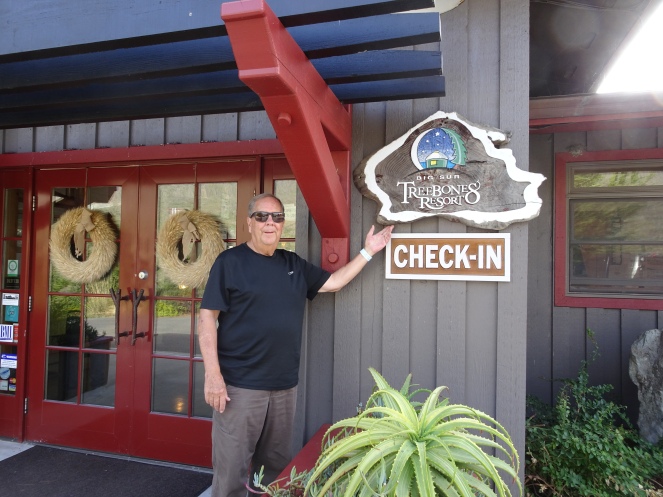 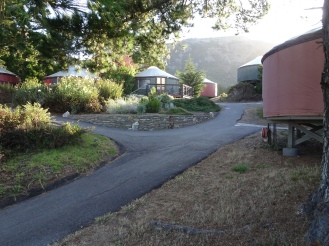 Finally in 2011 my daughter Melissa started Sky Ridge Yurts in Bryson City, NC with three Yurts. A few years later William and I would add two more Yurts and now the business is growing again with an additional two more Yurts. 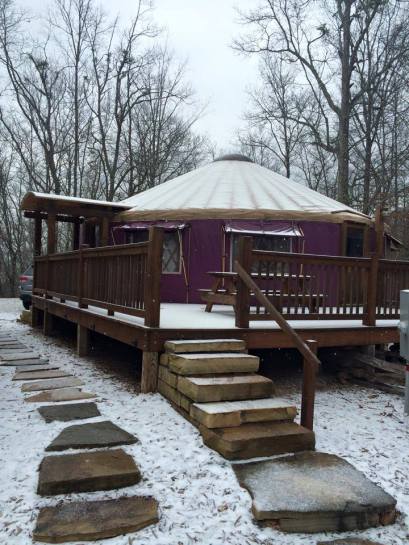 Here is a picture of me, Melissa and Pete Dolan from Pacific Yurts.  Pete is a vital part of our team – he is always available when we have a Yurt question.

Sometimes we have guests that really are not into “Glamping” so Sky Ridge Yurts also has this ultra modern Cabin.

Come Glamp with us in the Smokies!