For the last few days we have been traveling around the Greek Peninsula called the Pelopense which lies to the south of Mainland Greece.  There are many ancient archaeological sites here and we have tried to hit the top ones.  I previously posted the area of Nafopli but since they are a part of Pelopense I am going to include a few of our best memories in this post as well.

My favorite was the Ampitheatre of Epidauros!  The most perfect monument of its kind.

And of course we loved the Palamidi Fortress that sat just above our best Airbnb room during our trip.  There were 930 steps leading to the top so we elected to drive our rental car up there!  There was also plenty of climbing once we entered the fort.

Our next site to visit was the ancient city of Mycaenae.  This site dates back to 1700 BC and had Cyclopean walls, a massive Lions Gate enterence and royal burial tombs.  Our view from the road did not look very impressive but as you will see this is one of the best preserved archalogocial sites that date back this far in time. 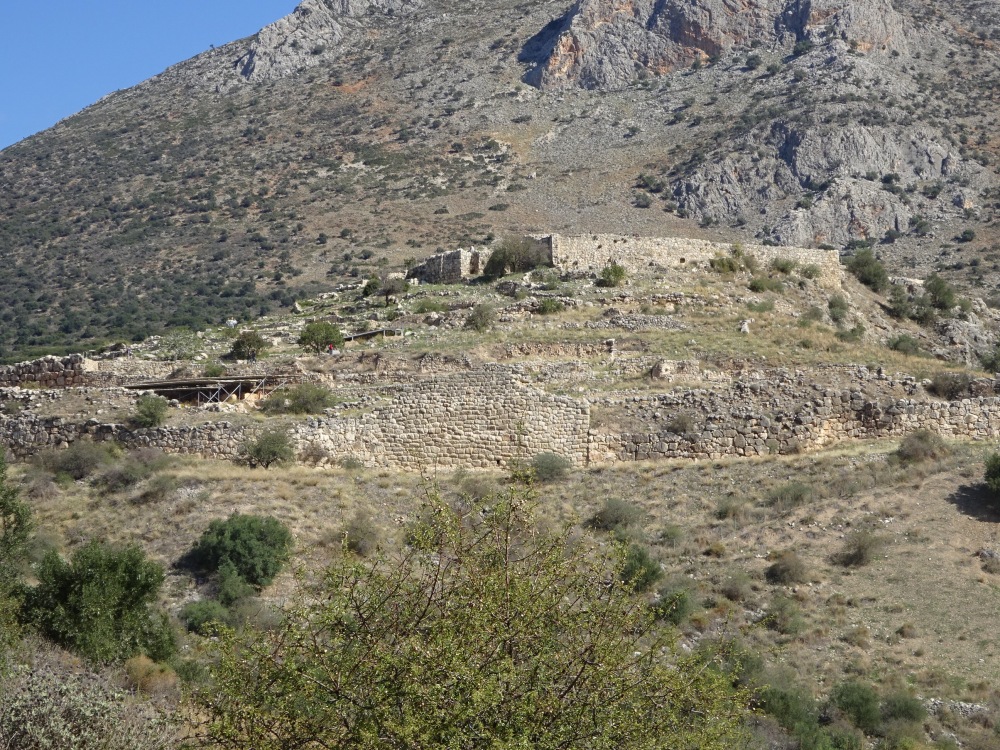 When we first entered the ancient city of Mycanae we came through the Lions Gate.  Very impressive!

There was a circle tomb just outside the main city which was very interesting.  Notice that there were double walls to the tombs. 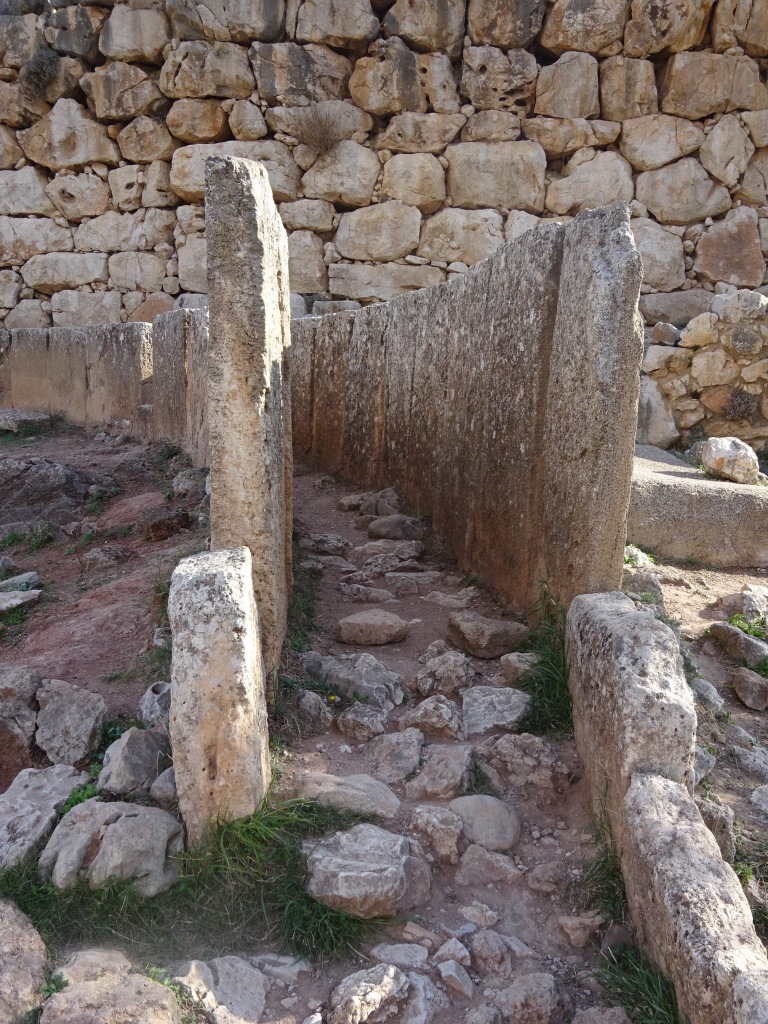 Once we reached the top of the city there was the royal Palace.  An interesting thing to note is that all along the slopes of the city there were very strong winds but at the top the wind completely died down.  I couldn’t help but think that the King definitely had the best sight in the city.  The royal family certainly had the best view of the land!  You might be able to see the groves of olive trees that grow there now.

And here in the ancient city stands a lone olive tree but if you look at the mountain in the background you will see that olive trees are all over the Pelopense. 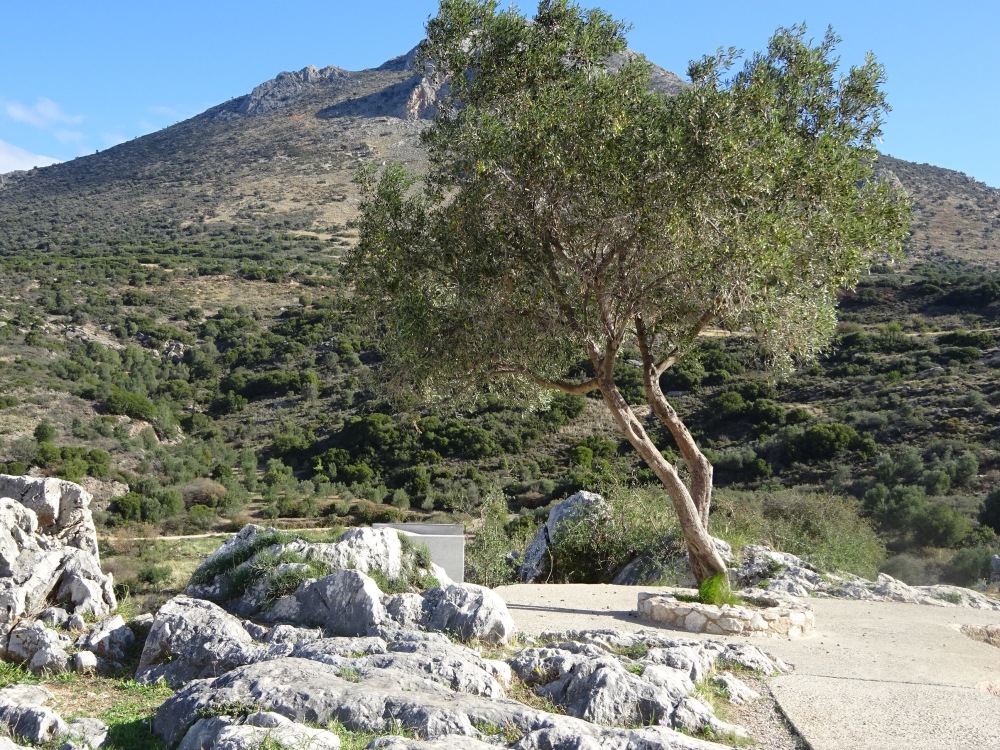 Next I will show you the back gate and the stairs leading down to the well where they would have gotten their water. 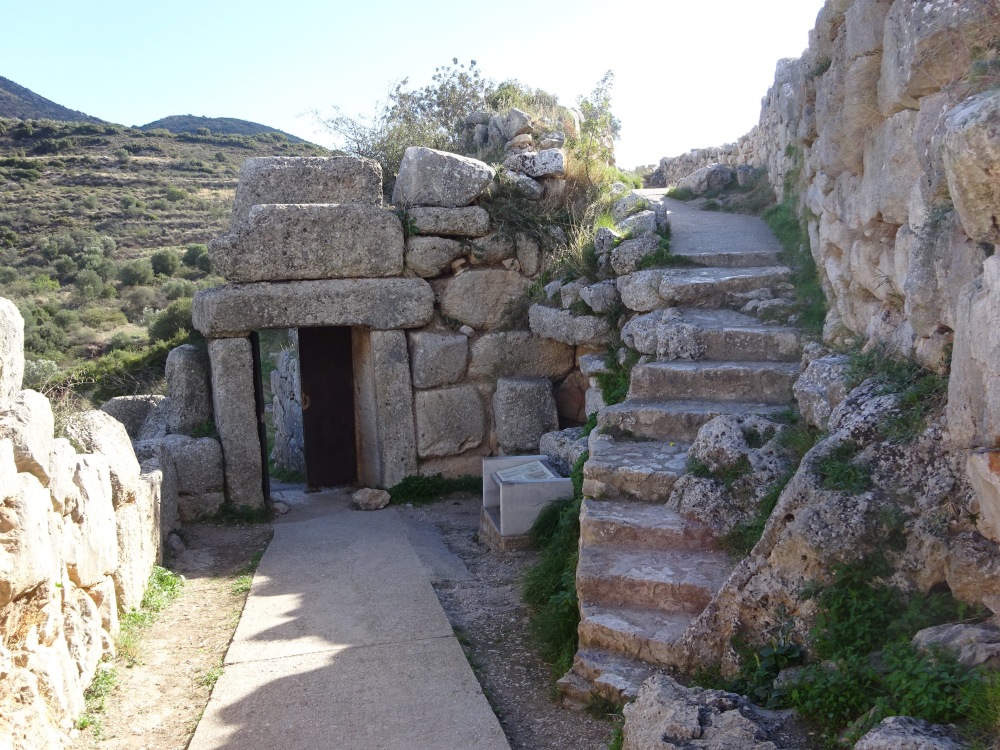 We always take time to go into the museums before leaving the sites.  This museum held the treasures of the King Aterus – you know, the King who won the Trojan War.

Here is the death mask made of pure gold.  3700 years old and looks like it was made yesterday. 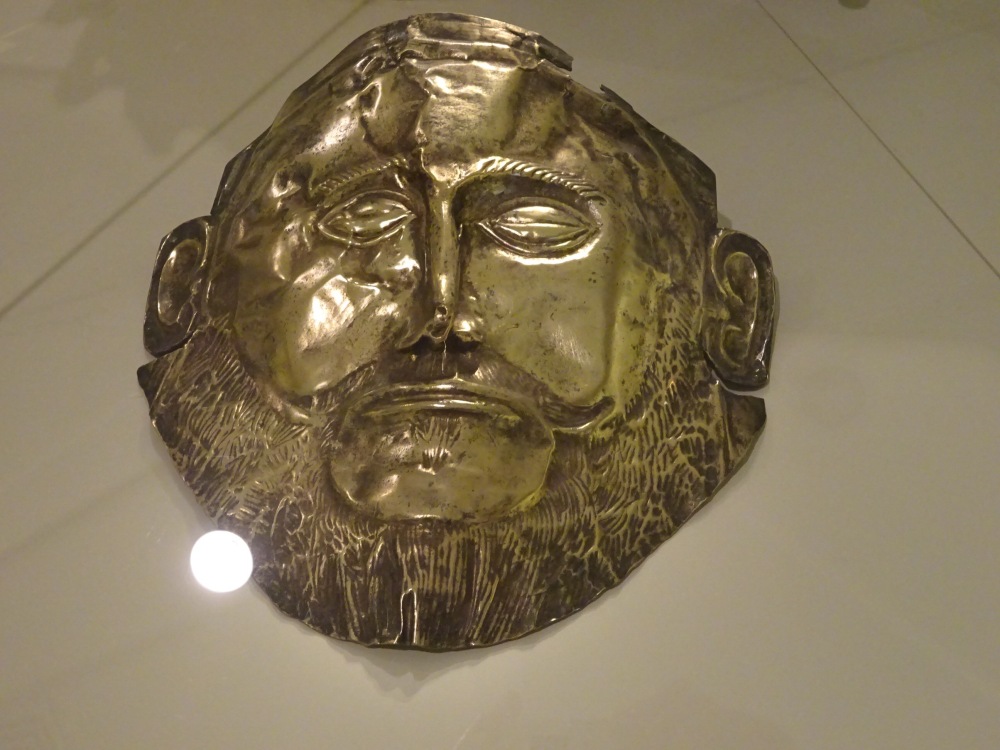 And here are some of the jewelry and other artifacts found in his tomb.

As we left the ancient city of Myceane we stopped at what seemed to be a very small site.  What we stumbled upon was so magnificent words cannot describe.  This was the completely intact tomb of Atreaus.  The tomb was shaped like a honey comb and the top was covered by the land.  I assume that originally the tomb stood uncovered. 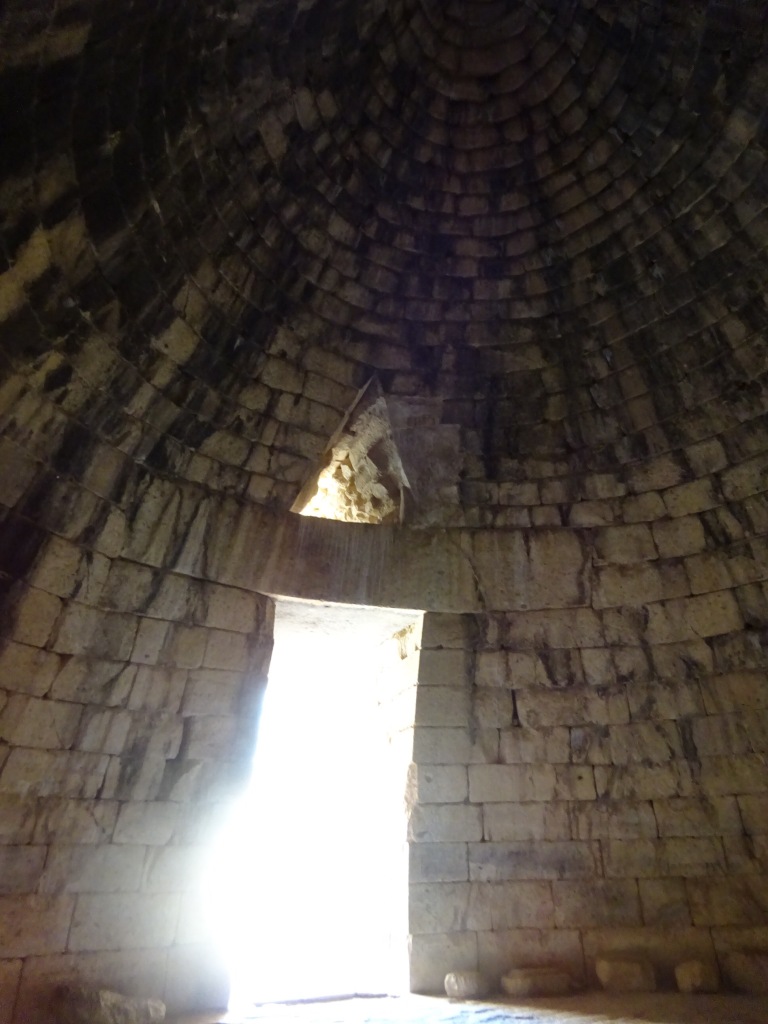 Next stop on our journey across the Pelopenese was Olympia – host of the original Olympic Games in the 8th Century BC.  Here are the remains of the Temple of Zeus.  All the rocks just lying around are actually not rocks but the ruins themself.

And the Olympic Flame!

We got to witness two things actually happening while we were at Olympia.  An archeologist at work and the reconstruction of a Collum. 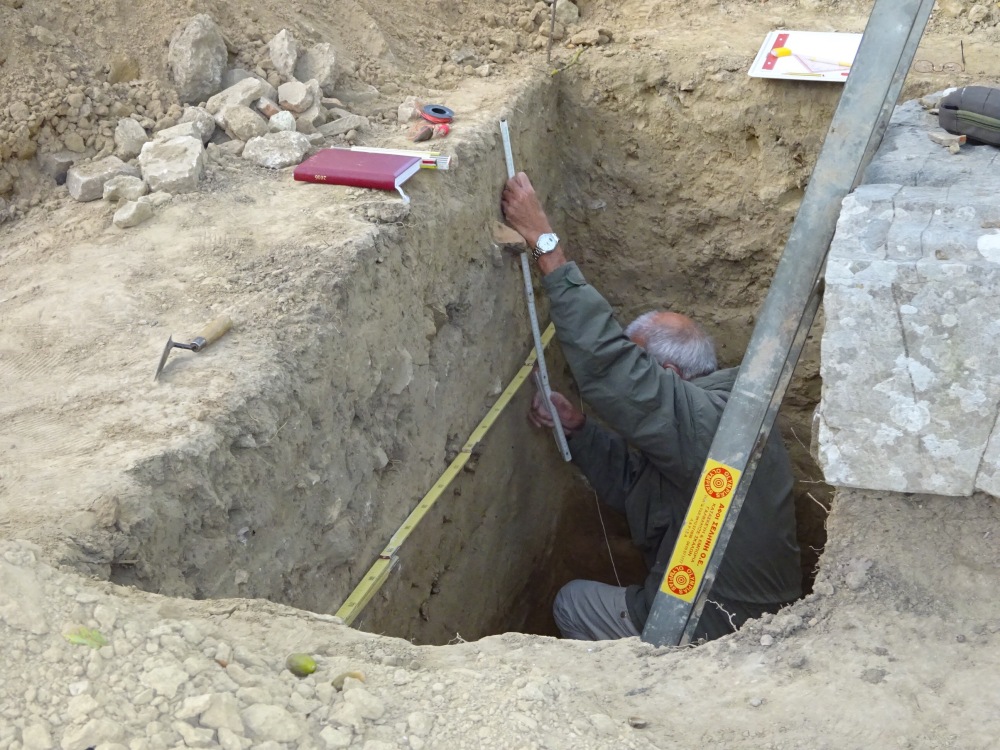 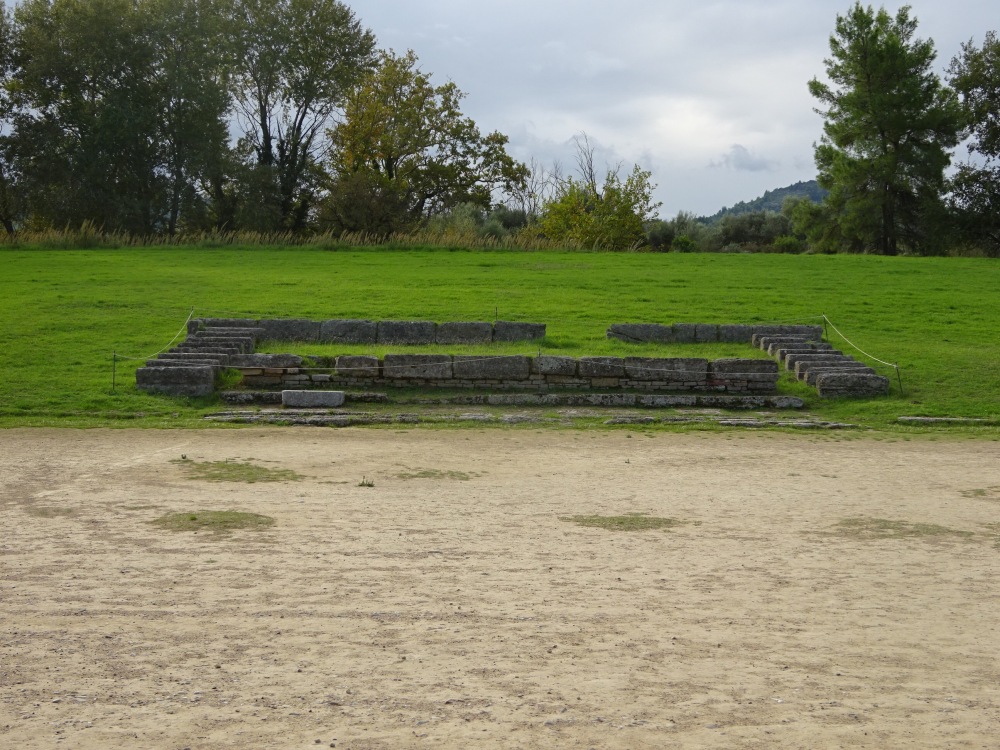 Here are some candid shots of me and William enjoying the site! 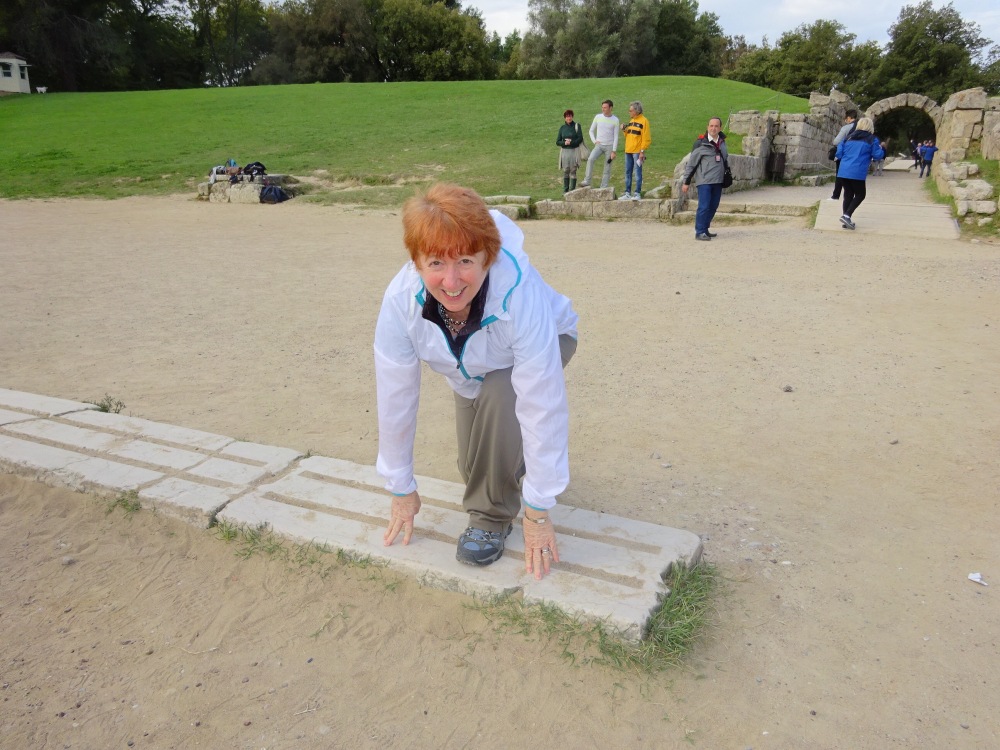 Olympia is such a large site I cannot portray it all to you.  Here are a few more interesting pictures before I move further in our travels.

The place Nike stood and the sculpture of Nike, carved by the greatest sculptor of this age and shows her descending from the sky.  Nike means celebrating victory in Greek. 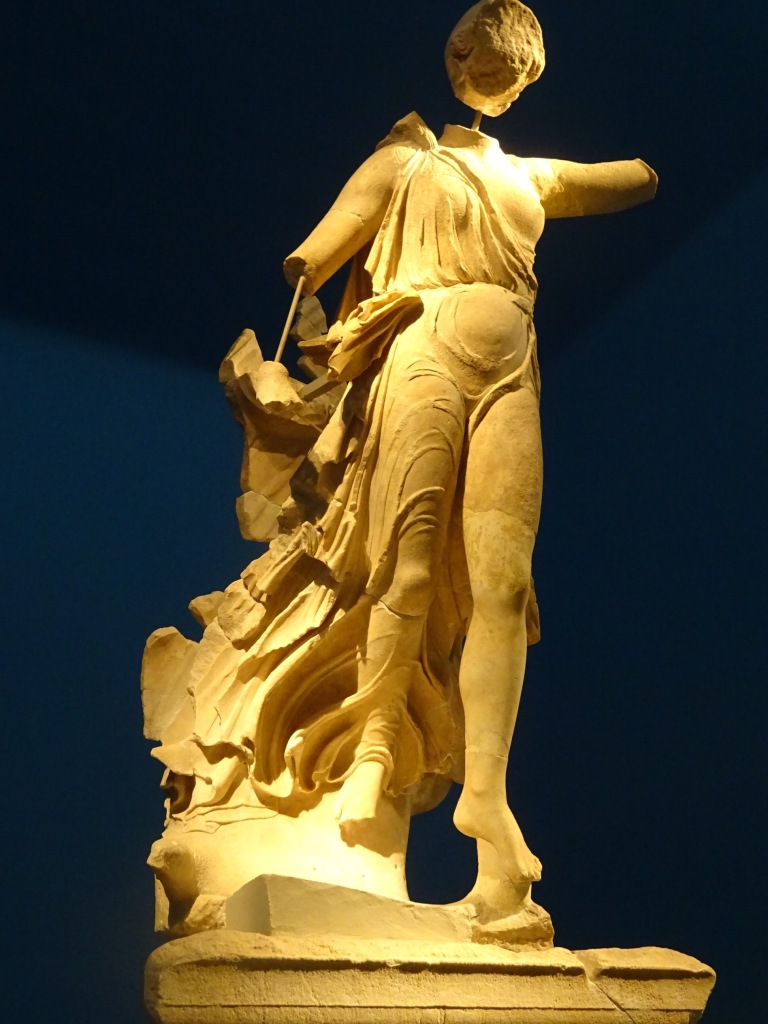 Stopping in Sparta we had to capture our pictures of Leonidis.   He was the baddest of the baddest.  He was the king leader of the battle of 300 which saved Western Civilization.

Next we visited Mystras.  A beautiful city full of Byzantine Churches.  The hill was filled with houses, mansions and palaces also.  At the very top of the mountain was the fortress.  We loved the Churches but were so glad that we had seen the same type of Byzantine Churches in Meteora where they were so well preserved.  We were able to photograph these churches so you will be able to see some of the art inside them. 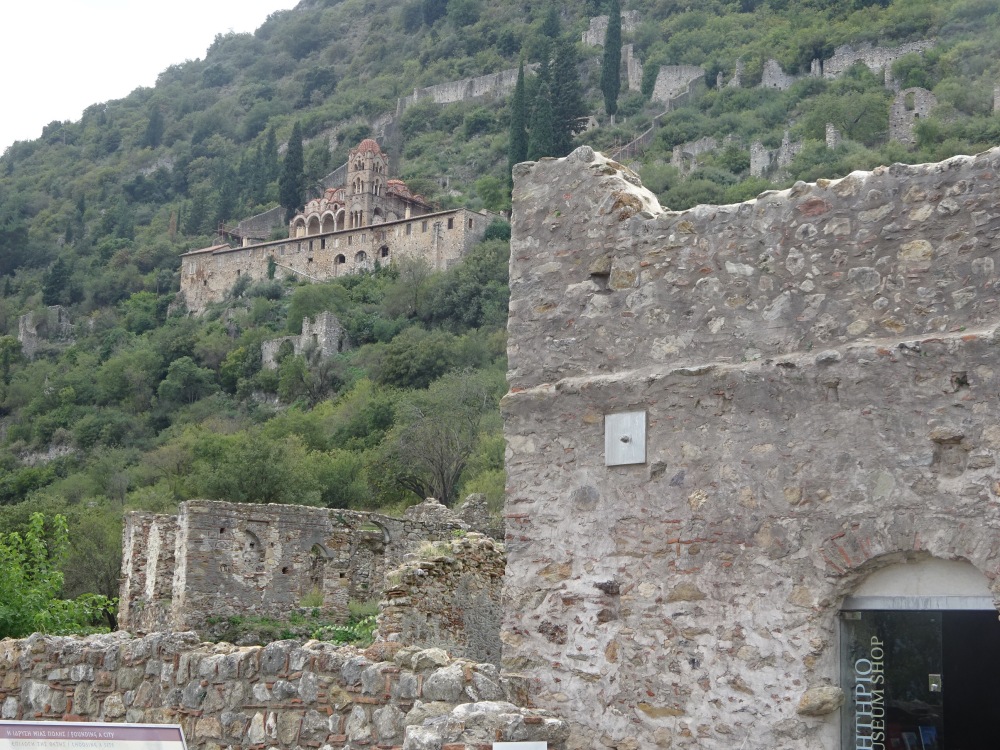 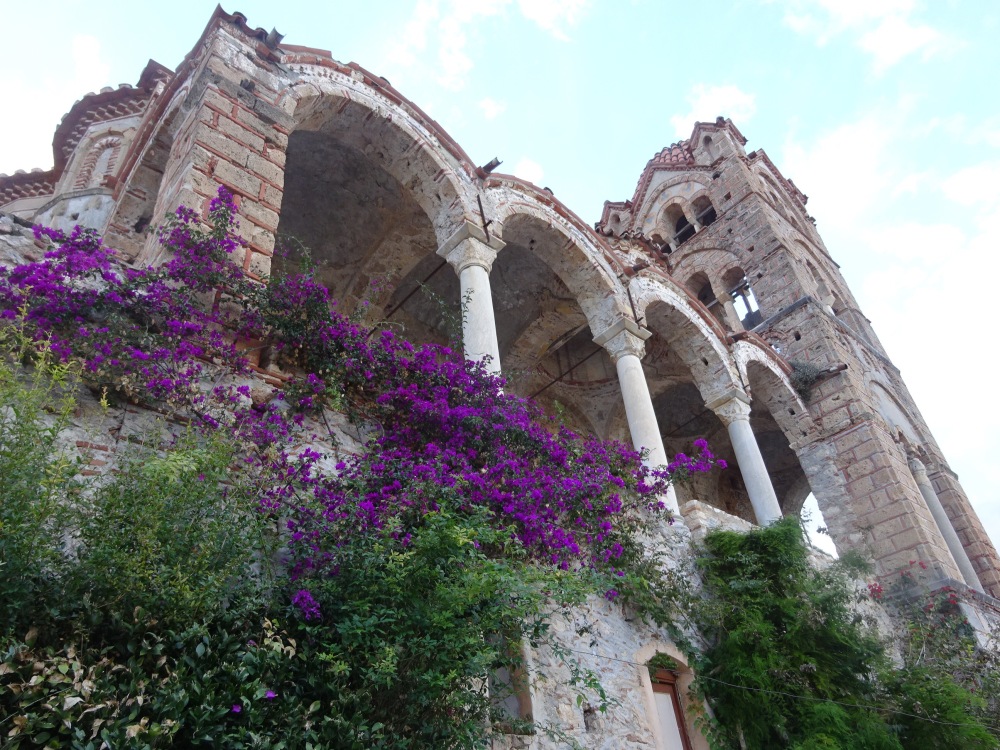 The photo above was an active monestary for Nuns and I was delighted to catch a photo of a nun delivering fresh fruits and vegetables to the other members.

And here is some of the art found in the churches.

But it was the fortress that I wanted to see and I was determined WE would go.  William and I climbed for over 30 minutes but to reach the top was worth it all.  Take a look at the pathway first.  There were a few remaining steps here and there but for the most part it was quite rocky.

Reaching the top and entering the fort gave us some of the best sights of the city of Sparti in the background.  It was a straight drop down off the back side of the fort and of course we had to get our pictures here! 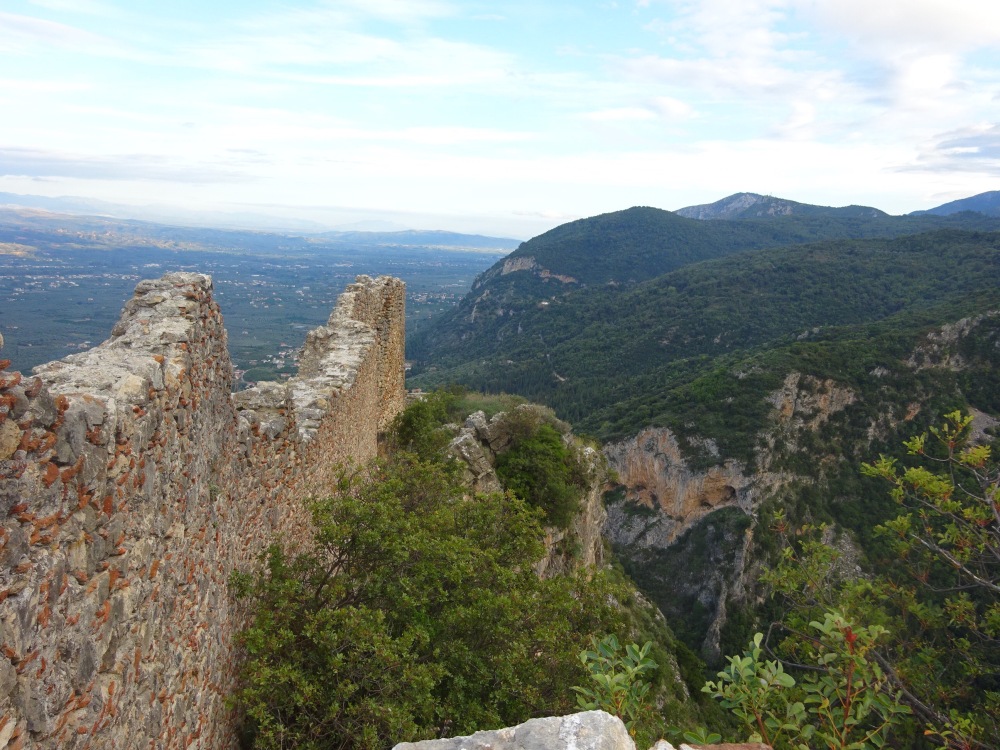 This is the last of the archeological sites except for the canal of Corinth which we plan visit on our way back to Athens.  After that we will go to Santorini for a few days of relaxation.  Today though we head to a place I have wanted to go for over five years.   I will devote my next post to this place.