Our flight to JFK this morning was very early so we were up and ready for our shuttle from the hotel at 4:30 AM.  We were expecting at least an hour to get through TSA security but were pleasantly surprised that we breezed through in less than 10 minutes.  We arrived in New York with a 5 hour wait until we would meet up with our tour group so we had some lunch and walked around the airport where we grabbed this very appropriate snapshot. 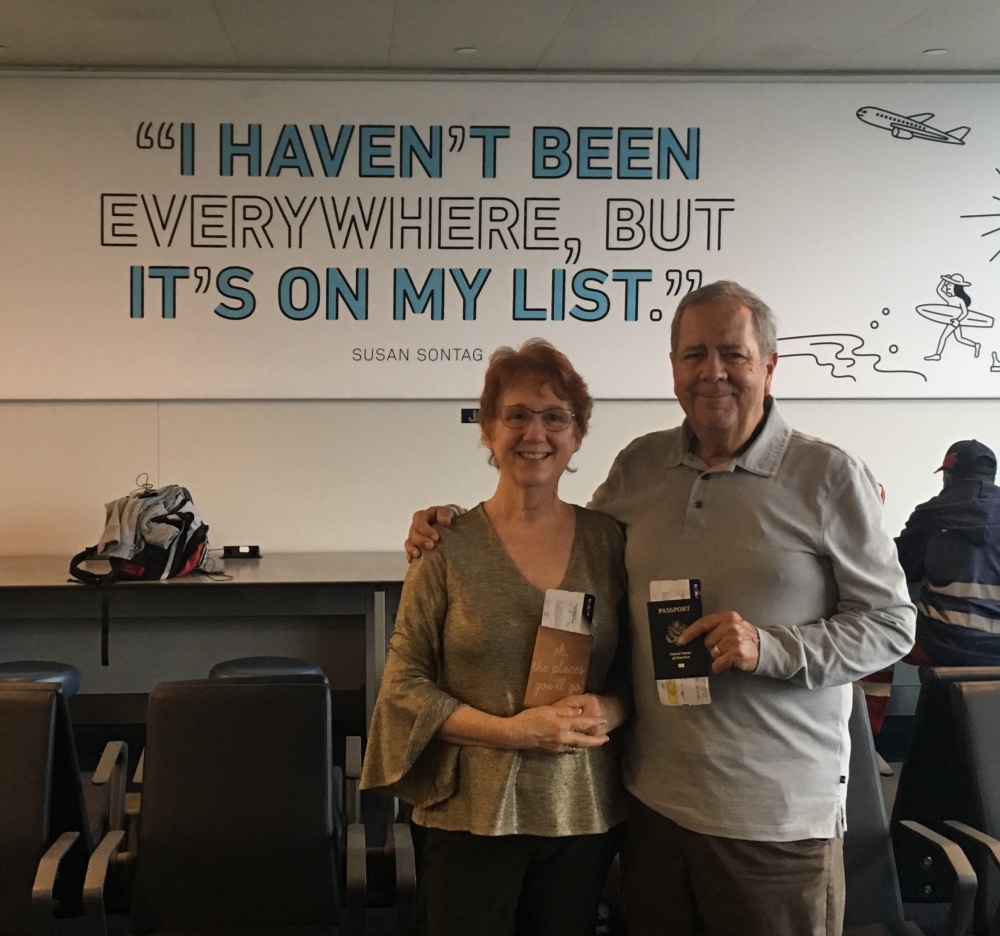 It was exciting to meet up with our group and quite interesting to learn where they were from and why they decided to come on this tour.  Most everyone had been planning for this trip for 6 months or longer and they were shocked to hear that we had just booked the trip a week and a half ago. We will look forward to really getting to know our fellow travelers during the upcoming days.

William and I got a real laugh when we checked our bags at the ElAl counter.  The attendant smiled when the weight displayed on the scale.  Each bag weighed in just at 18 pounds. Both bags together were lighter than most traverler’s single bag. 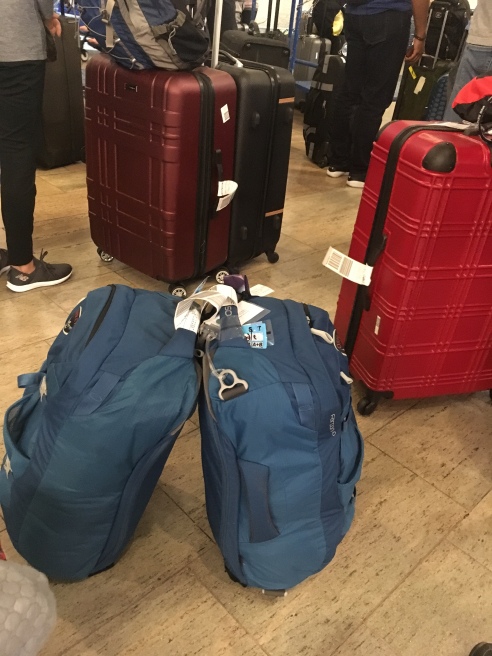 Our flight was 11 hours. Thank goodness for inflight movies and audible books!

This is our first time ever traveling with a tour group. We usually just go on our own and stay at Airbnb’s. However, we have to admit that being in a tour group sure made it easy after arriving at Tel Aviv Airport. Our backpacks were swept away to our hotel and we simply boarded a bus headed to Caesarea by the Sea, home of Pontus Pilate and the location where the Apostle Paul was imprisoned for two years. King Herod started colossal building projects throughout all of Judea. Caesarea was built primarily for the Romans to honor Augustus Caesar. Built in 44BC, it was the Roman capital of Judea and headquarters of the great Roman Army. We first entered the ancient city at the Amphitheater. It looked to me to be restored with all new stones but after questioning our tour guide he told us that everything we saw was original. The city had been covered with sand and so well preserved that it looked new. Of course the iron railings were added for tourist safety but other than that it is 100% the ancient amphitheater.

On a side note, after traveling all the way to Israel we learned that the roadies setting up there at the Amphitheater was for the band America for two nights with sold out performances. You know their famous song – A Horse With No Name.

We continued touring the ancient city and saw the pillars from King Herods Palace. 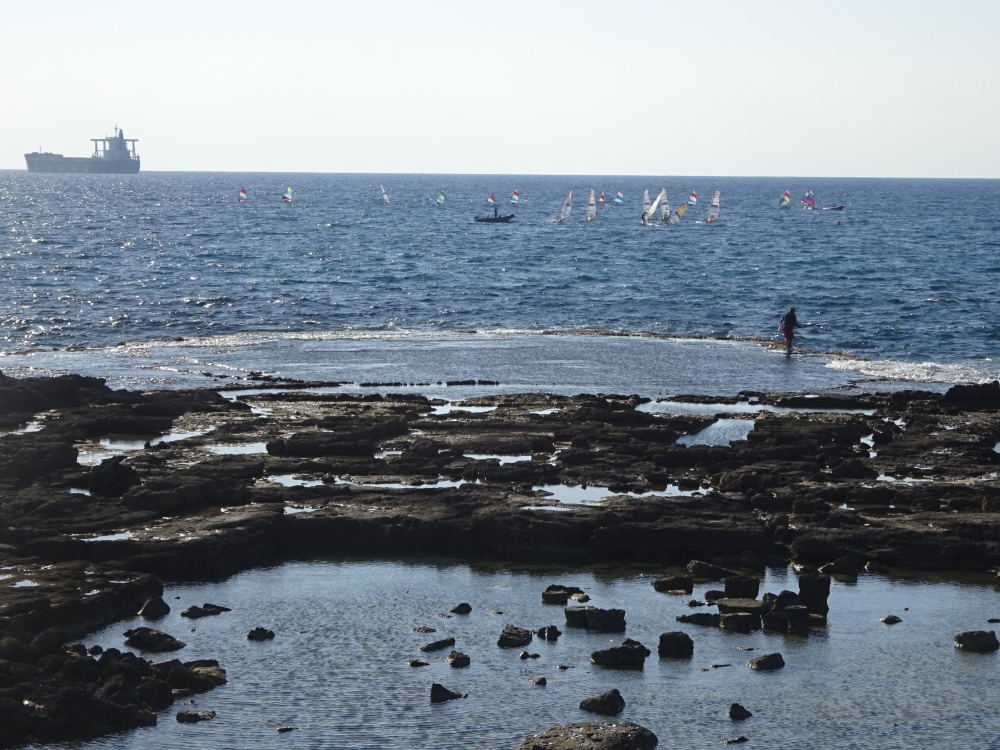 The city was colossal. 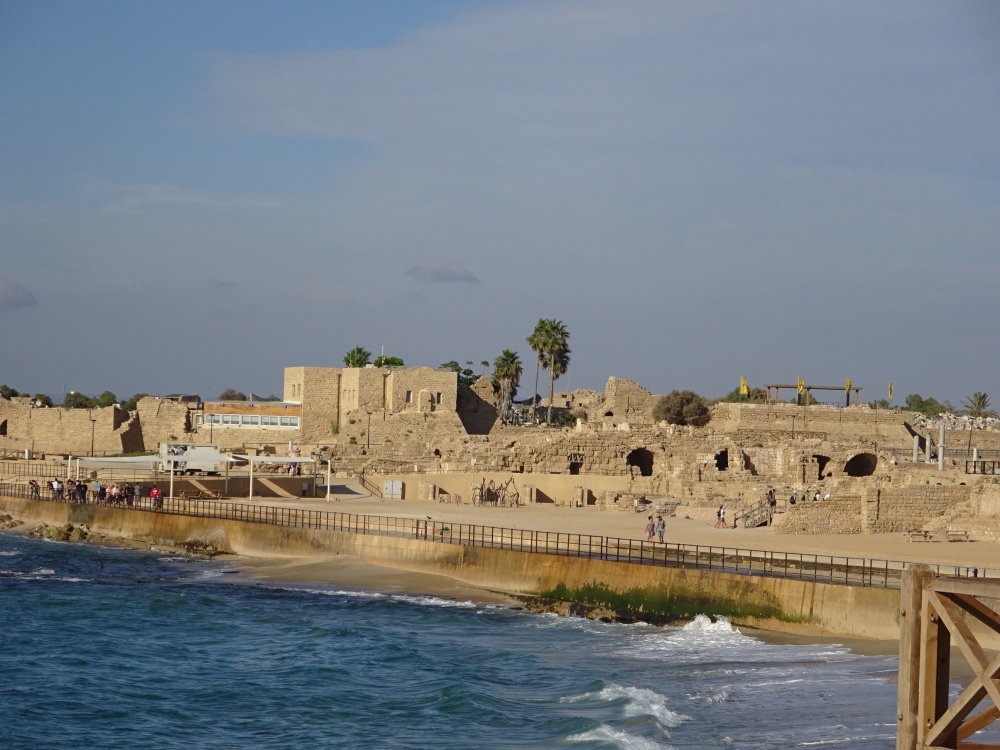 And it had the largest hippodrome in the world. It could seat over 200,000 people to watch chariot and horse races.

Romans had developed aqua ducts which transported fresh water from the source to where ever they wanted to build a city. The remains of this aqua duct system was the most impressive site to me.