We have less than a week left on your European Adventure and William and I have decided to slow the pace a bit and just relax.  Lake Constance is only a couple of hours south of Stuttgart so we are spending 3 days there to relax.  Lake Constance is a very big lake on the Rhine River at the foot of the Alps.  It borders three countries – Germany, Switzerland, and Austria.  We decided to stop at Konstanz before continuing on to our Airbnb for the next three days.

The most famous monument at the harbor in Konstanz is the Imperia.  It is the only rotating monument that we have seen during our entire trip across Europe.

We met this German who explained the monument to us.  He said in one hand is the Pope and the other is the King,  both wearing only their headpiece.  The woman he said, “how do you say it in English?”  and then someone nearby told him the word for the woman is Whore.  So she holds both the religious powers and the political powers in her hands. That certainly makes the monument a bit more interesting doesn’t it?

The man was boarding the boat at the harbor and he told us that this boat was the first ever car ferry used in Germany and was now being used to take tourists out on Lake Constance.

Konstanz is know for its medieval and Romanesque architecture.   The lake is over 40 miles long so the harbor had lots of boats.  William being a sail boat captain was delighted and just kept snapping pics of the boats.

It wasn’t long before William had tickets for us to ride out on the lake. 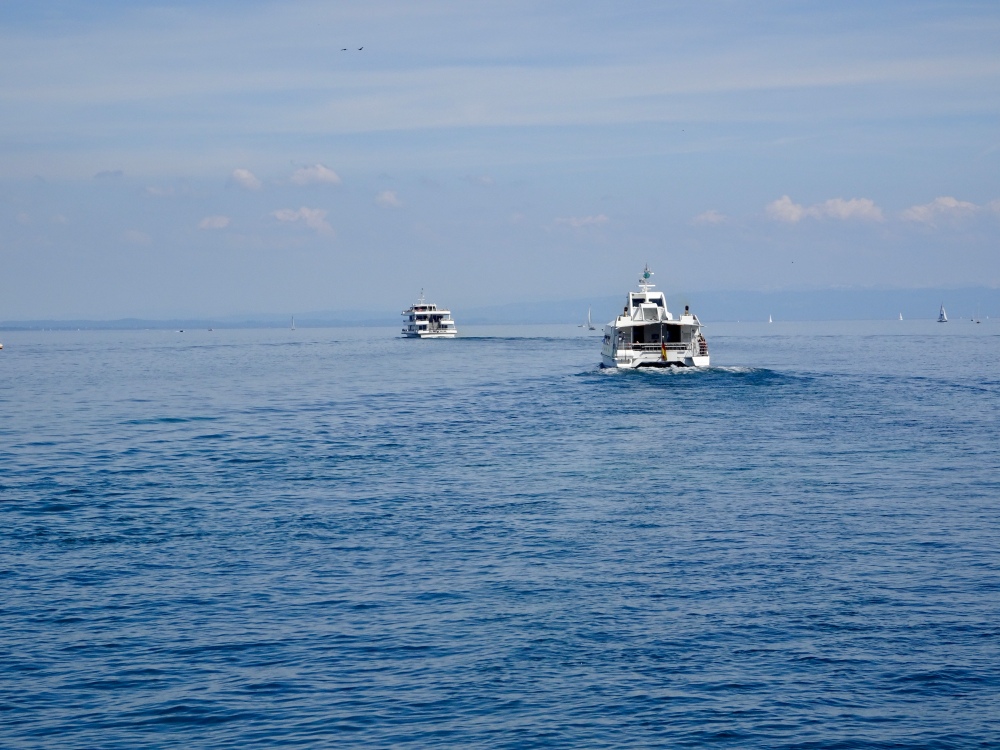 This weekend Lake Constance was hosting a big sailing race so while out on the water we were able to see lots of sail boats practicing for the event. 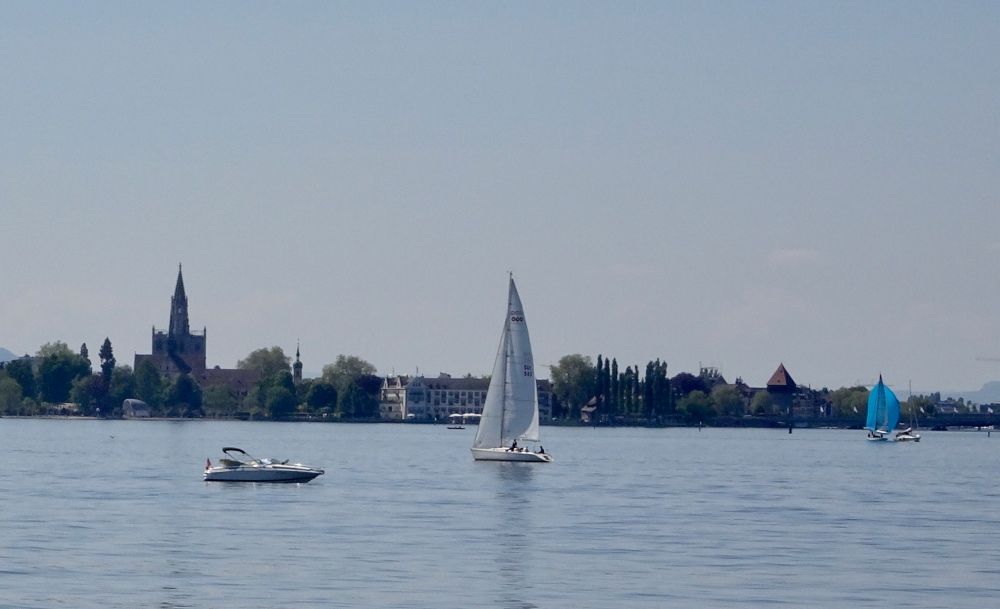 And I was able to capture a few shots of the city. 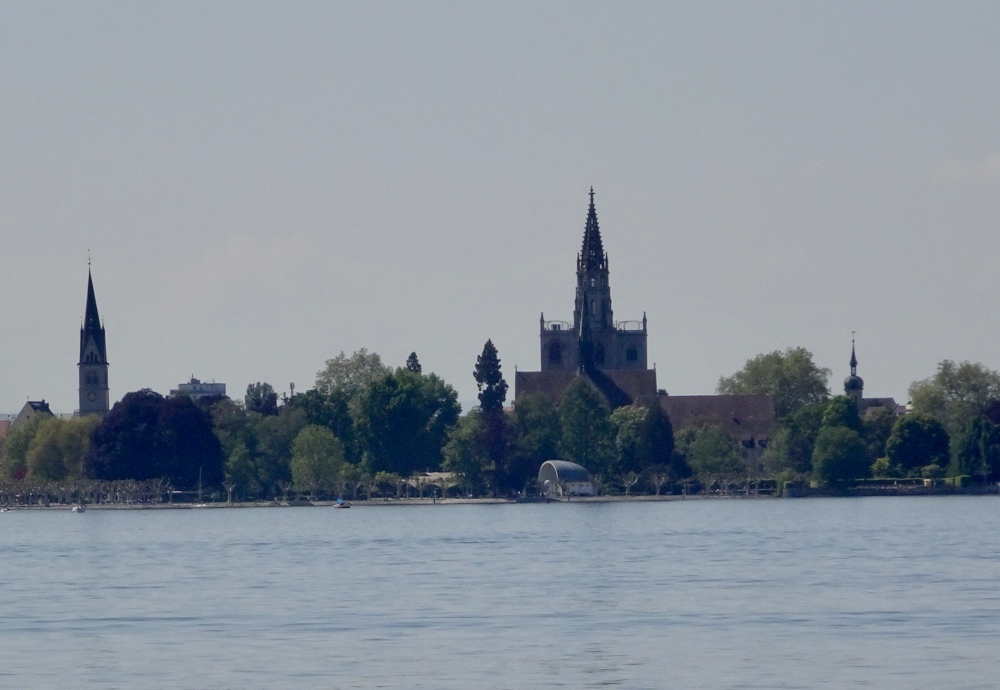 Konstanz was full of tourists, restaurants, and lots of shopping.  Here are a few shots of the city center we found interesting.

Our goal was to start relaxing so after an hour or two around the lake we decided to head on to our Airbnb in Switzerland.  I knew this place just a few KM away from the lake would be nice but I had no idea how perfect it would be for us.  We were greeted by Reto. First he took us to show us the garden.

And then he took us to the roof top of the garage where he had the hot tub.  I could not believe how incredible this patio was.  Reto had programable lighting, a lounge area, a small grill, and of course the hot tub with a built in TV and sound system. 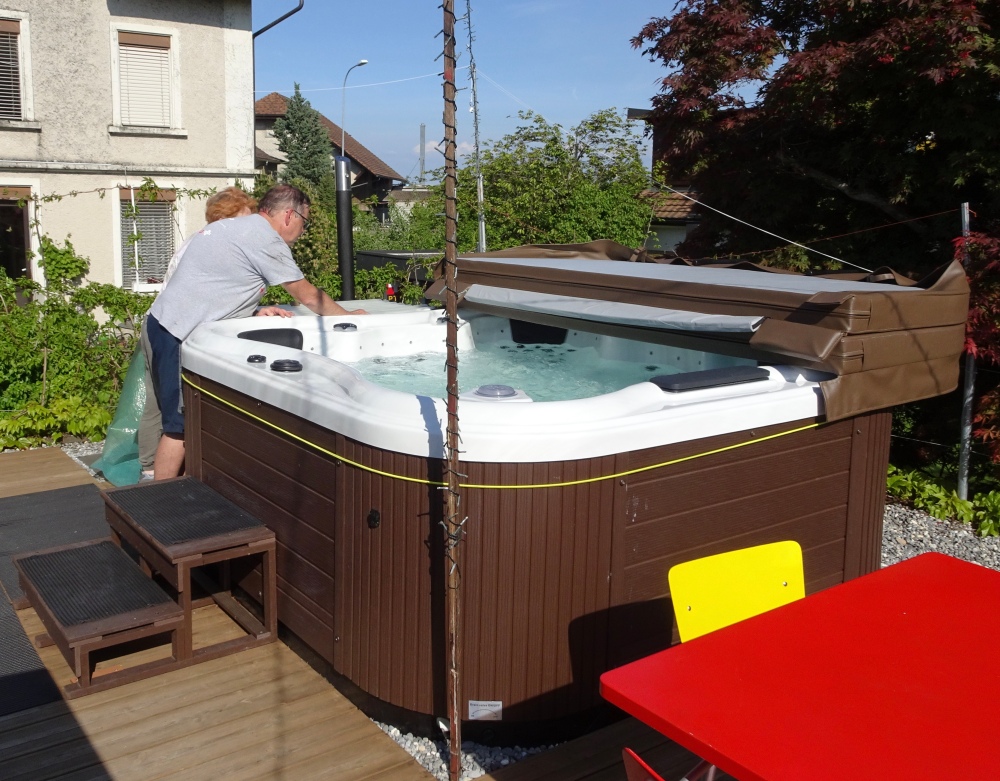 Next he showed us around the Cinema Room.  This room had a projection TV with a Harman Kardon Surround Sound System, an exercise elliptical machine, reclining lounge chairs, and of course the Pop Corn Machine to make your time at the Cinema even more enjoyable.  Oh, and all the TV was in English. 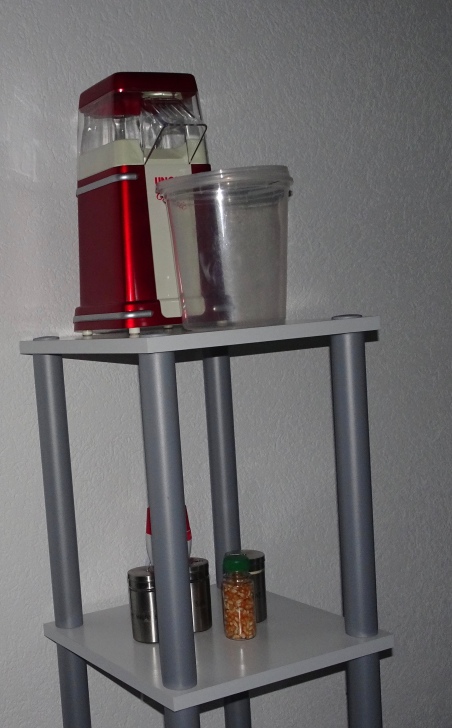 Reto reminded me of my Brother-in-Law, Ron.  Just like Ron, Reto is full of “ideas” and always has the best gadgets available.  On our second day here with Reto and Hildegard we ordered in Pizza, popped some corn, and watched a bit of TV. 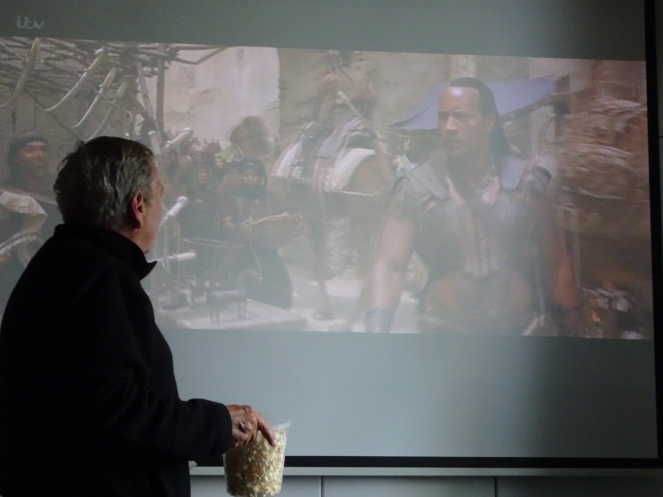 At the entrance to our room was this photo collage which is the most personalized welcome we’ve ever received as Airbnb guests.

Our room had the most inviting bed.  It was a completely adjustable bed with separate controls for each side.   You could raise or lower your head or your feet any amount you needed to get comfortable.  There was also a professional massage chair that fully reclined and adjusted to your body size for the most therapeutic massage possible.  Reto had installed programable lighting for the room.  You could adjust all the lights to any color hue and brightness.  This was definitely the place for our last few days in Europe.  We would certainly be able to relax and slow down.  The only problem would be that we would not want to leave. 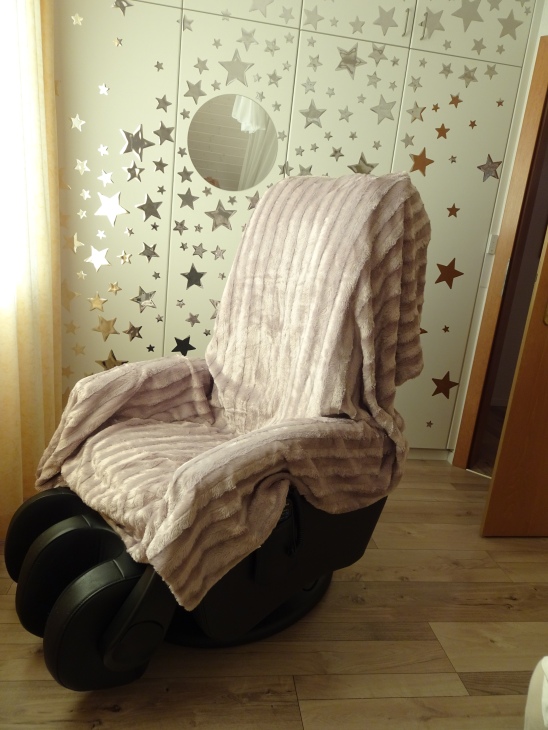 There were little touches everywhere!  From the water feature, the welcome fruits and chocolates, to the personal robes. 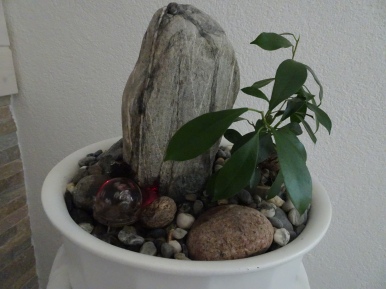 The view from our window here at Hildegard and Reto’s home is one William and I will remember forever. 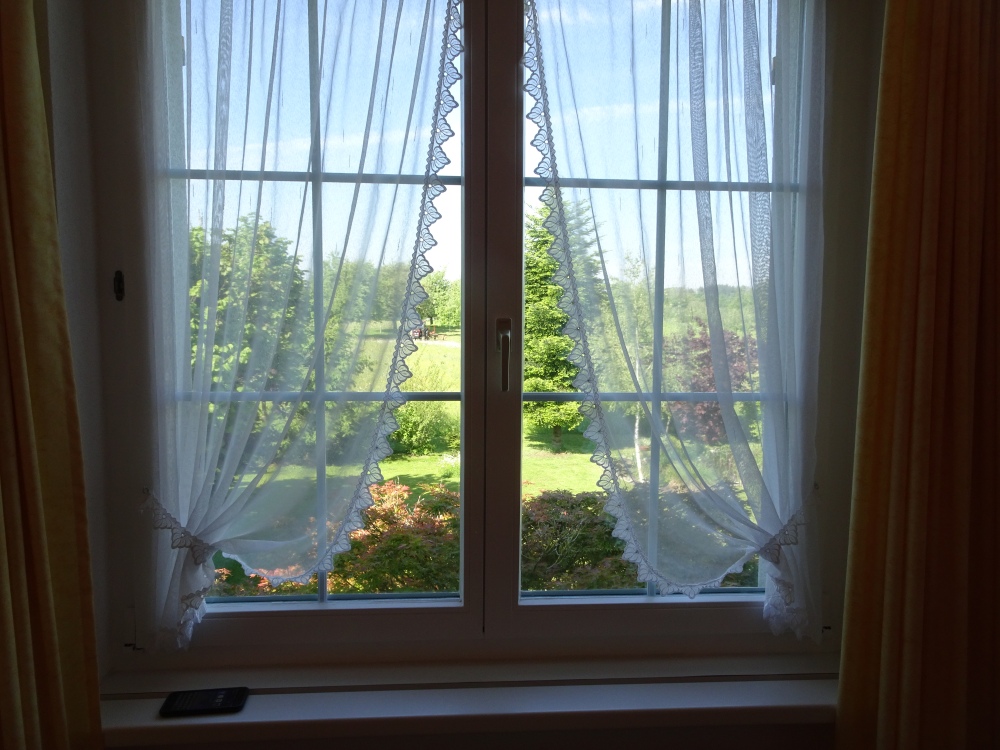 I think we enjoyed breakfast in the garden almost as much as we did the hot tub and massage chair.

The thing we like the most about staying in Airbnb’s when we travel is that we get the opportunity to meet the local people.  Hildegard and Reto are really interesting people and we will remember them always.  Reto is 5th generation Postmaster in this little village. The restaurant across the street was the original Post Office.

The next Post Office was next door to their home and is where his Mother and Father live. 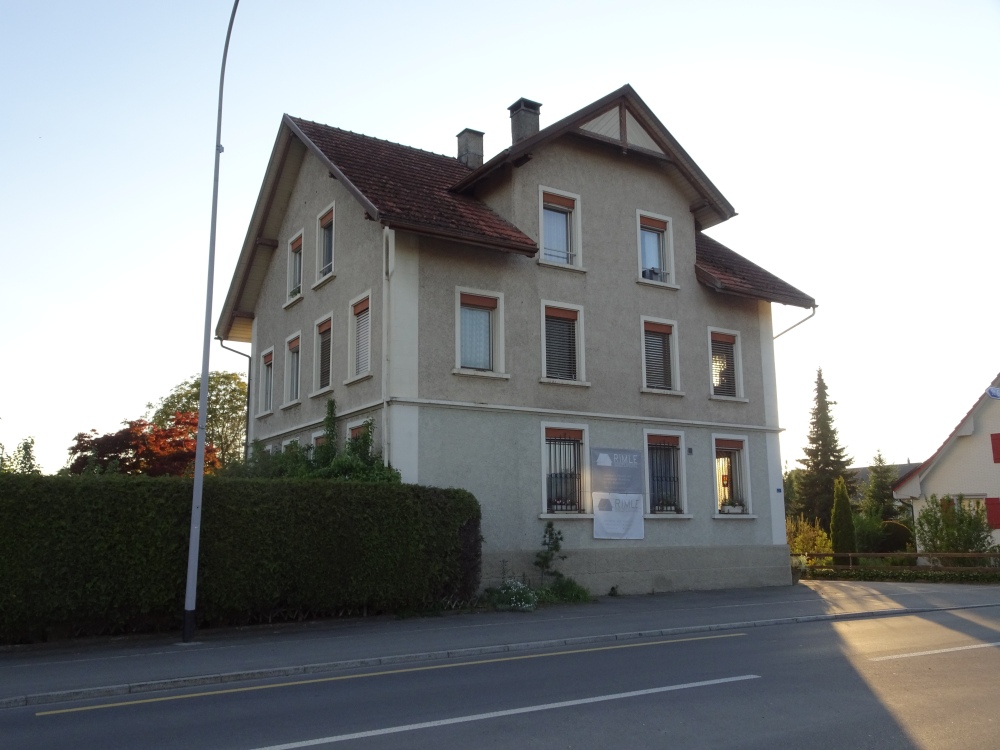 And their Home was the last Post Office before it was closed and moved to a larger village.  Hildegard told us that there were more cows in the village than people.

Hildegard and Reto have four children.  We had the pleasure of meeting one of their daughters during our stay.  They have one grand daughter, Linda,  who is the light of Hildegard’s life.

Currently Hildegard is the Postman here in the village. 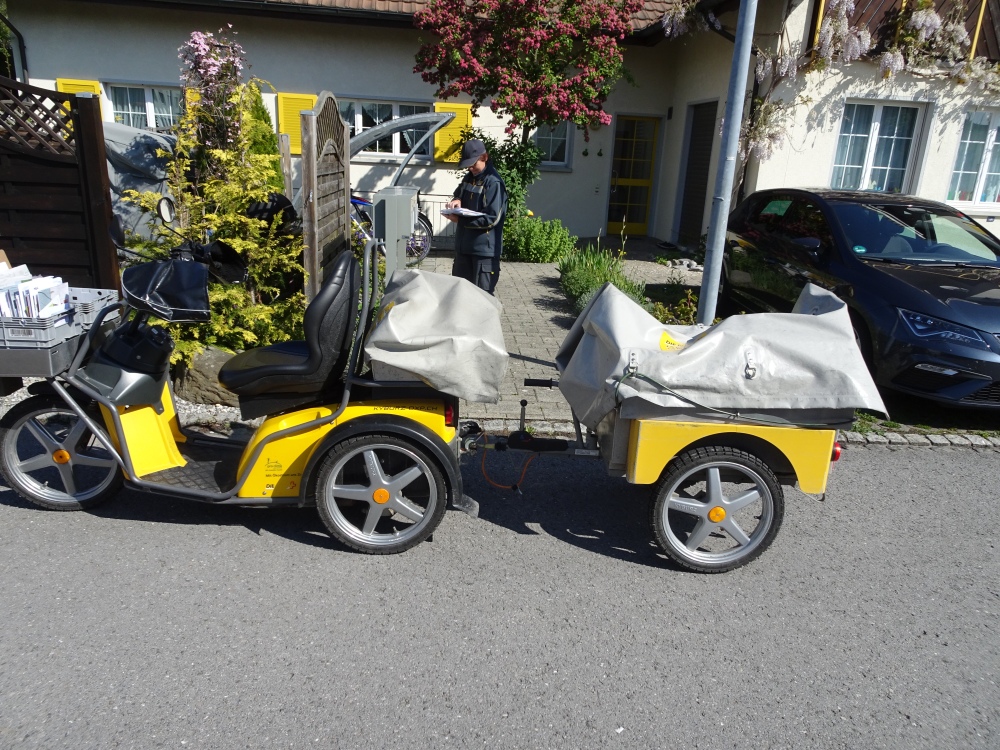 Reto now works with an American Company, Phillips and instructs clients how to use defibrillators.  This award that was framed and hanging in the hallway of the house tells how Reto saved someone’s life after a car accident here in the village.

Retro and Hildegard are part of a Red Cross team that took the award for the Top First Aid Competition for all of Europe.  When William asked Hildegard where he could buy a lapel pin of Switzerland for his collection she said, “Oh, I have one.”  She gave William one of her pins for winning this award.  What a pin William now has to remember Switzerland.  The pin is in the shape of their country, the Red Cross at the bottom is where their village is located, and the Flag in the upper right corner is the flag of their Village. 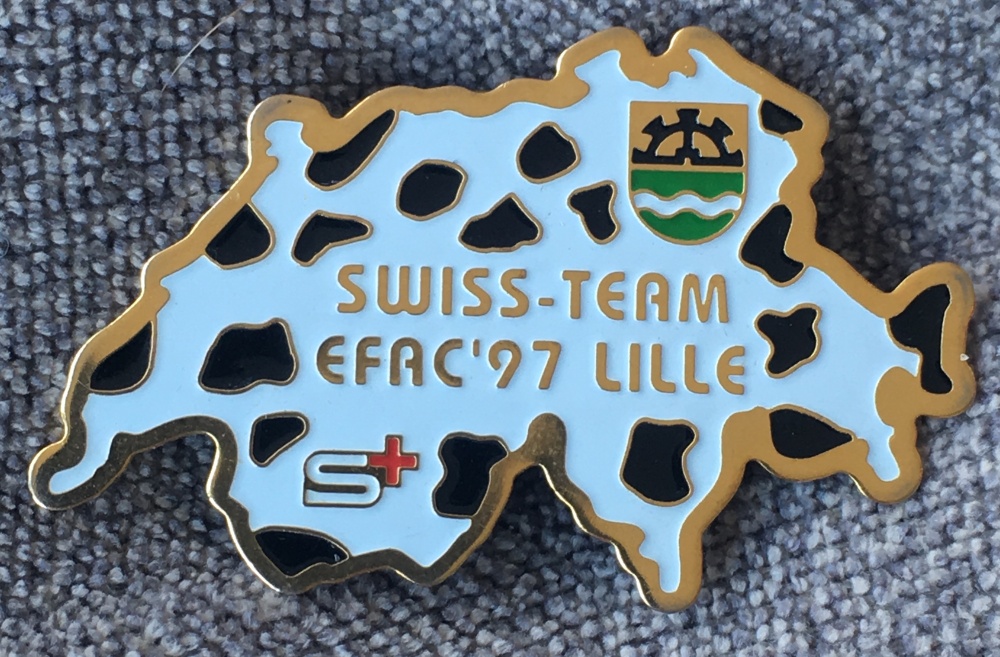 Before leaving this morning Reto showed us the “bomb shelter” in the basement that all Switzerland houses are required to have.

We love traveling with Airbnb because of the people we meet.  Every time we think of Switzerland we will think of Hildegard and Reto. 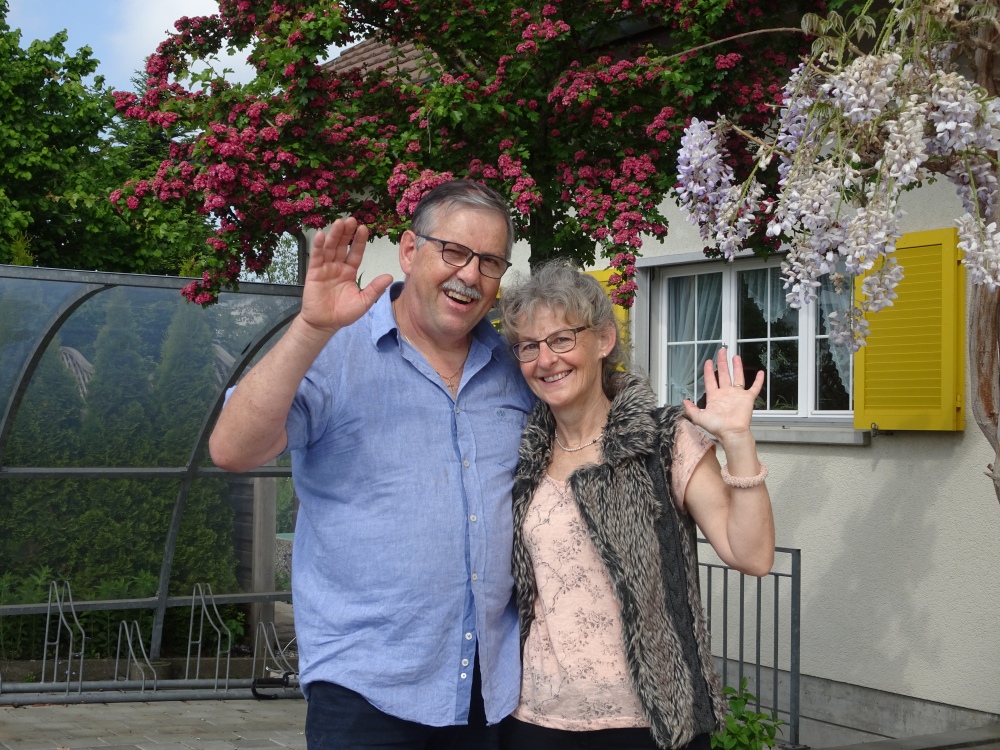