We left Yellowstone National Park at the East Entrance near the Wyoming town of Cody.  We were excited to see Buffalo Bill’s Western town as we had visited his birthplace in LaClaire, Iowa and learned so much about him at the Buffalo Bill Museum.  He was an American Soldier, a Pony Express Rider, a bison hunter and showman.  We arrived in Cody early morning so it was impossible for us to visit any of the shows or visit museums as we were headed north to visit another National Park.  This site was the original town of Cody and the historic buildings preserves the lifestyle and history of the Frontier west. 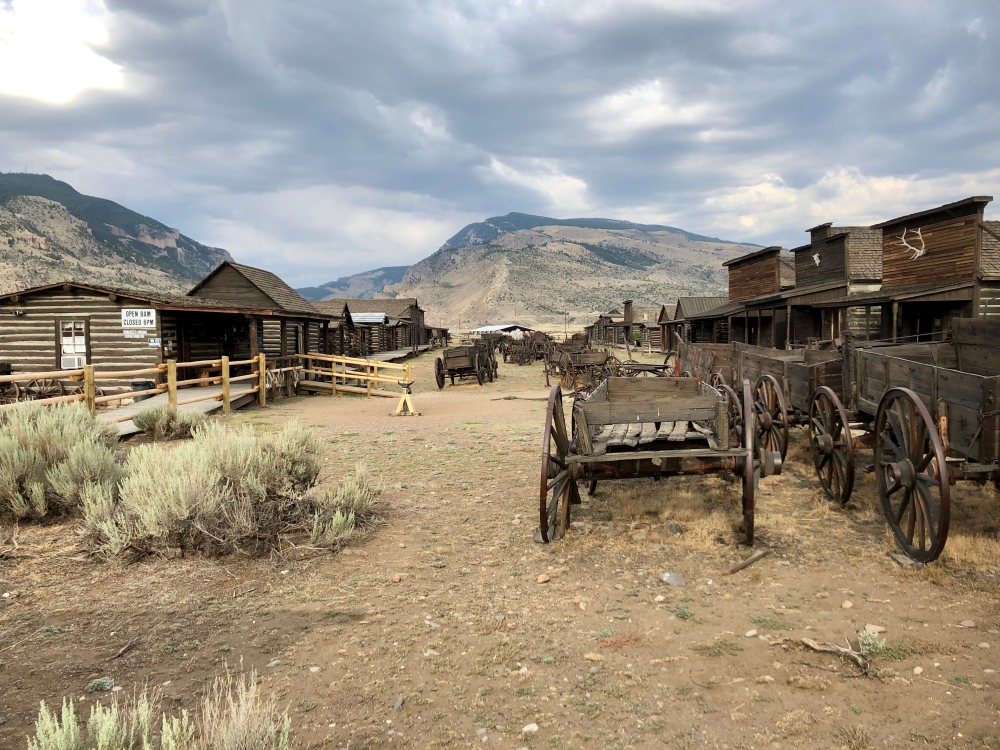 We continued driving North of Cody for a couple of hours to arrive at the Little Big Horn National Monument in Montana.  This battlefield was Custer’s Last Stand and a massive victory for the Lakota and Cheyenne Indians.   These headstones are on the actual knoll of Custer’s Last Stand.  The darker color headstone was the final resting place of General Custer until a year later when he was buried in the West Point Cemetery.  These headstones are the actual place on the knoll where the Calvary Soldiers actually died.

There is also a Custer National Cemetery at the Battlefield like Arlington to provide a final resting place for those that have served in the armed forces.

The Indians did not bury their dead here at Little Big Horn but I did see this sacred prayer tree to remember them. 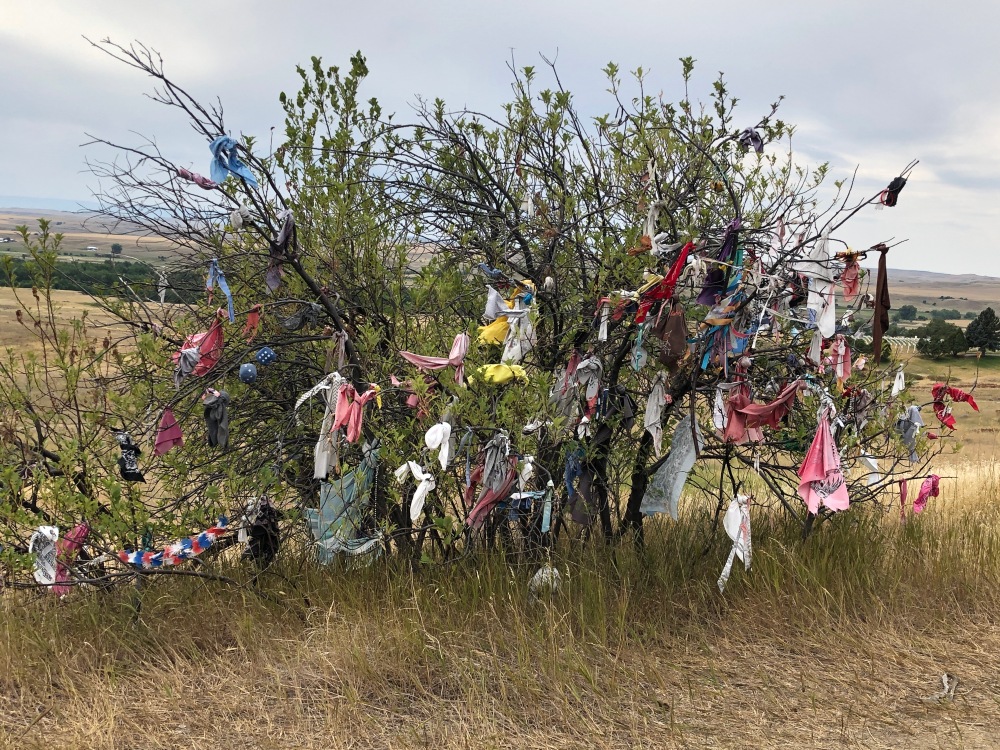 This tower is sacred to many of the northern plains Indians and we saw lots of prayer cloths as we began our walk around the base of the tower.

Hundreds of parallel cracks divide the tower into columns making this a premier climbing area. We actually saw a group of Korean Climbers on the tower.

As we left devils tower we stopped to watch the prairie dogs play. 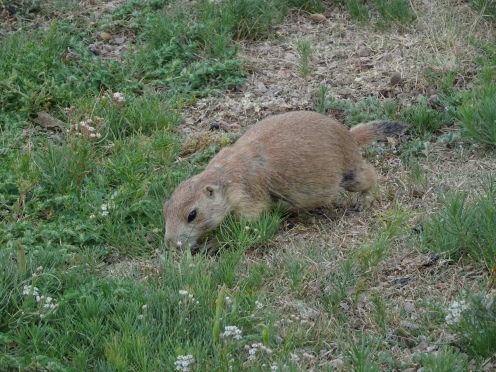 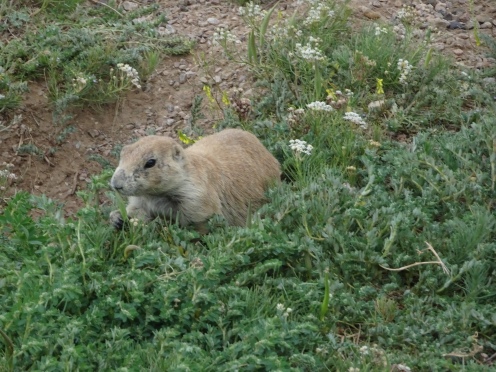 After leaving the tower we drove on to spend the night in Spearfish, South Dakota.  We were close enough so we could get up early and drive to Custer State Park where we hoped to see lots of wildlife.  The park is known for its large herd of bison and scenic drives.  Here are a few snapshots of the wildlife we saw. 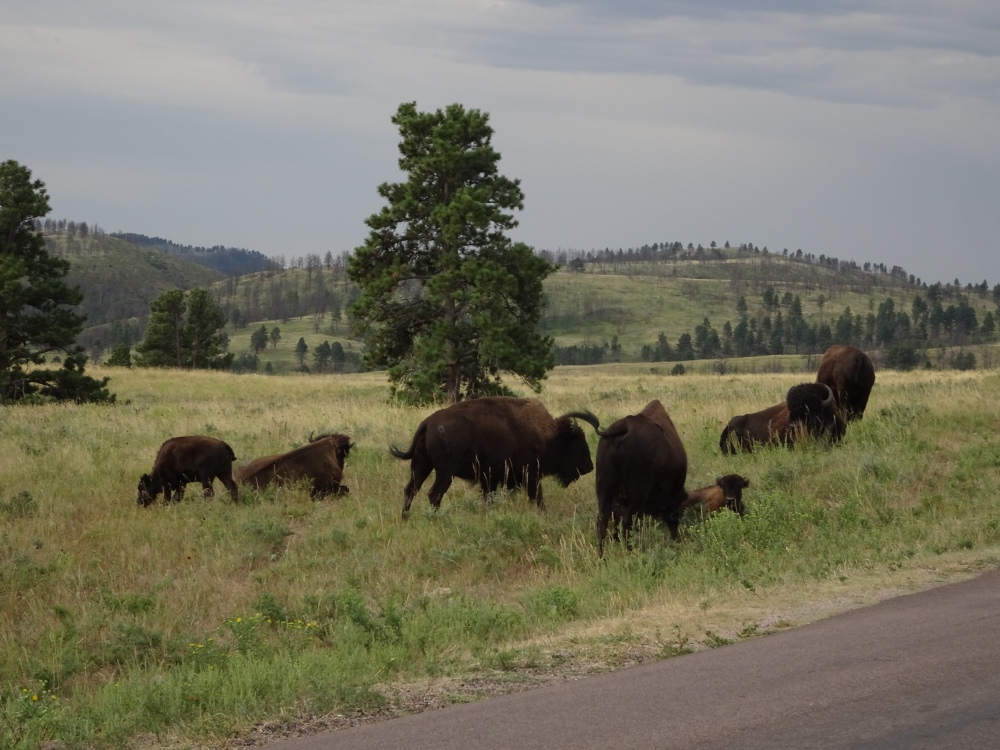 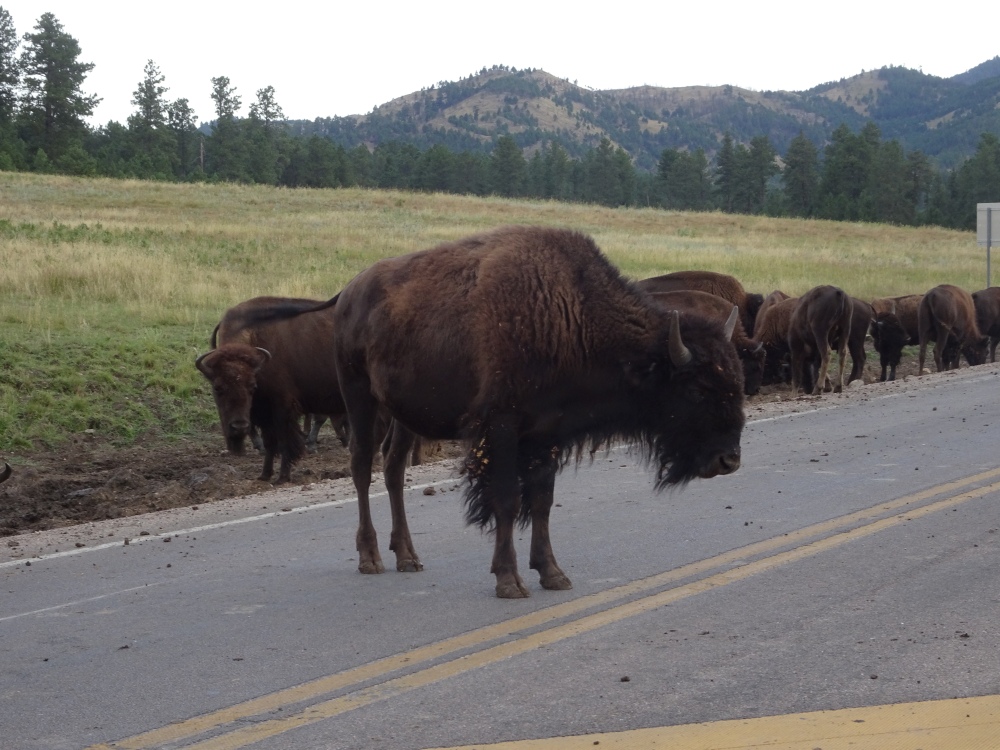 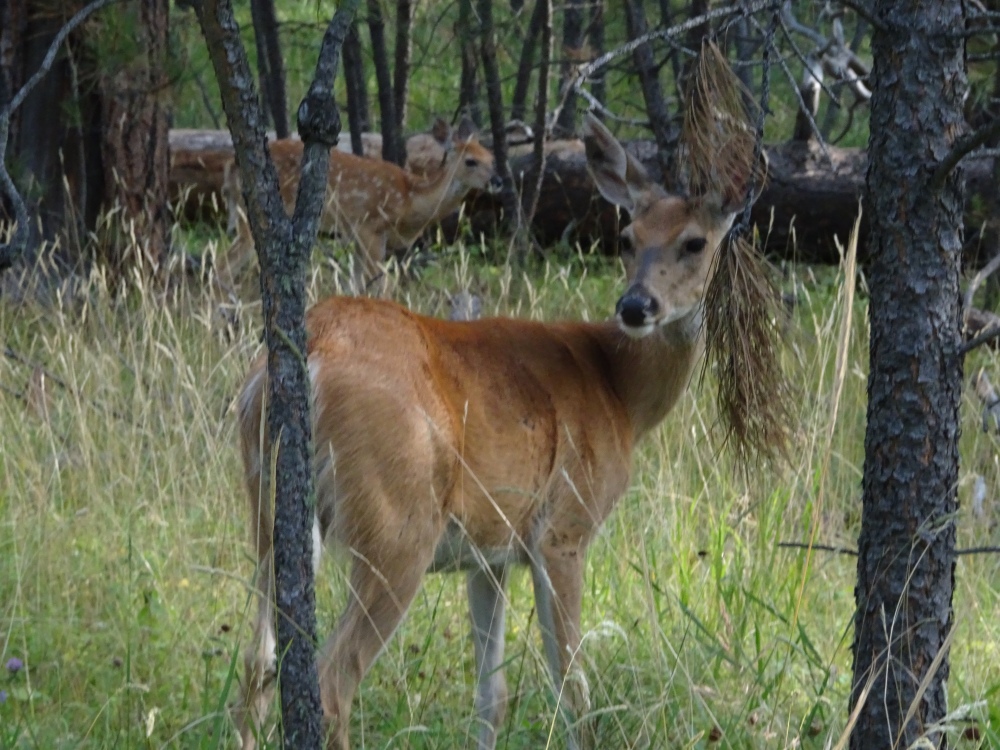 My favorite part of the park was the needles highway which gets it’s name from the needle-like granite formations.

Below is the granite formation where the park got its name.

Our grandson Simon loves to climb so it was a real delight for us to see climbers on these walls.  You know we had to text the pics to him immediately.   His comment was “ Yeah it looks like a tricky slab”

The road winds thru the narrow formations and tunnels giving very tight clearances for an exciting ride.

Just 11 miles from Custer State Park (a must do in our opinion) is the Crazy Horse Monument.

Chief Henry standing Bear ask the sculptor Korczak to create a tribute to the North American Indians to show that the red man has great heroes too.  Korczak was also one of the sculptures for Mount Rushmore.   Work began on the carving in 1939 and will be completed in another 40 to 70 years.  The main reason for this is that no federal or state funding is accepted for the completion.  This project is way more than the mountain carving.   There is an Indian museum of north America, an education and conference center, the native American educational and cultural center, a 4 year University and a hospital to be completed soon.  Although Korczak is deceased his family continues his dream.

Look for the American Flag in the picture below.   Korczak was laid to rest here underneath Crazy Horse’s mountain named Thunder Mountain.

We took the bus tour to the base of the mountain where the carving is and we were so very pleased to get a closer view. 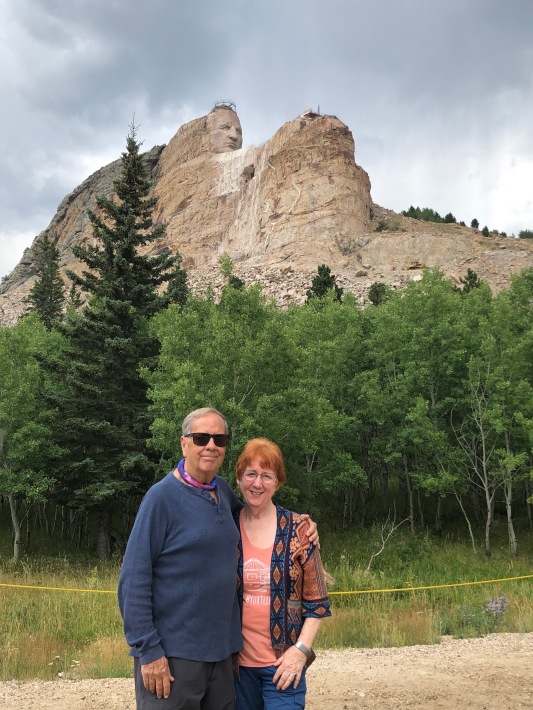 Our final stop for the day was mount Rushmore.  It was very inspirational to see the faces of our founding fathers carved in the mountain. 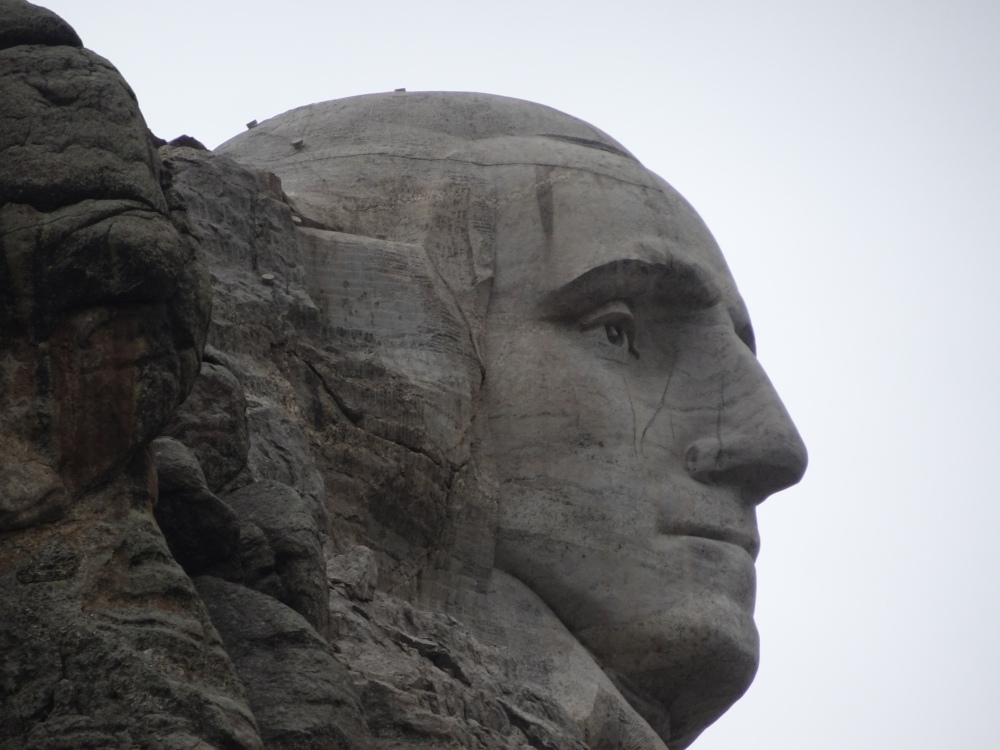 It’s interesting to know that we spent only 30 minutes at Mount Rushmore but spent three hours or more at Crazy Horse.  Another interesting fact is that all of the heads of Mount Rushmore would fit into just the hair of crazy horse. 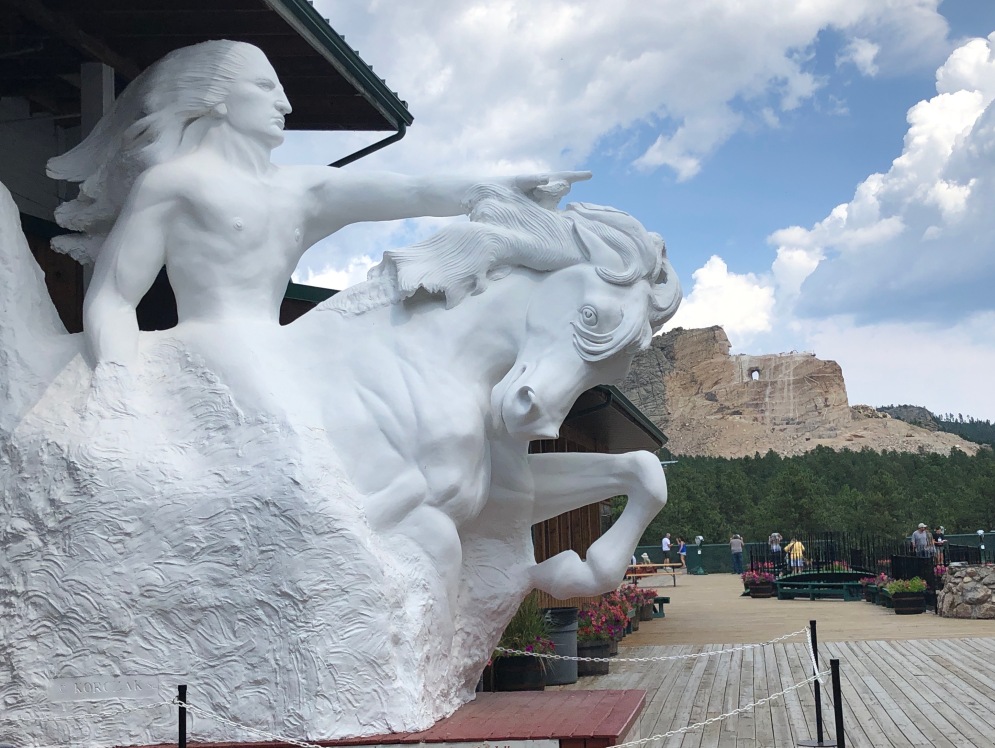 Our next stop along our eastern route was at Wall drugs.  One of the world’s most well-known tourist attractions.  Wall’s history started in 1931 when Dorothy and Ted Hustead opened a drug store in a little town located in the middle of nowhere. 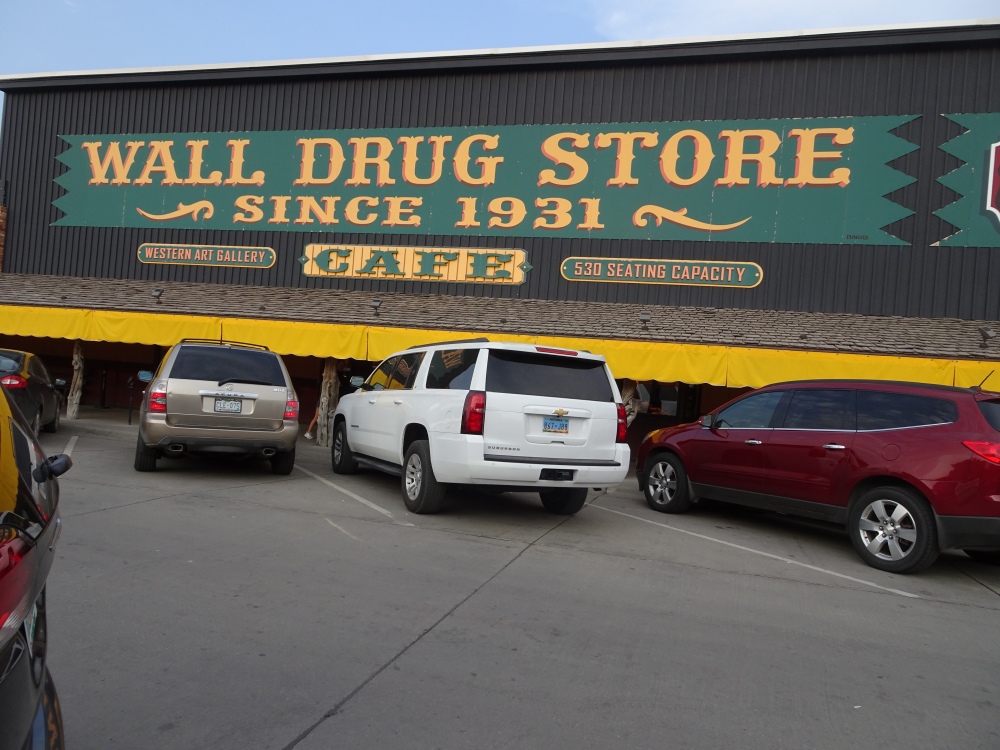 After almost 5 years the Husteads were struggling to make a success of their business. This is when Dorothy had an idea.  Why don’t we make signs and put them on the road for the people traveling to Mount Rushmore and offer them what they really want – free Ice water.

This offer for free ice water really started bringing the people in. The next summer they had to hire eight girls to help them.  Of course you can still get the free ice water but you can also grab breakfast lunch or dinner there today.  However the real attraction today is the five cent coffee and donuts.   There is so much to do at Wall Drugs.  They have one of the best private collections of western art for you to see, you can shop till you drop, or you can play around in the backyard and get your picture on the giant Jackelope or on the broncing buck. 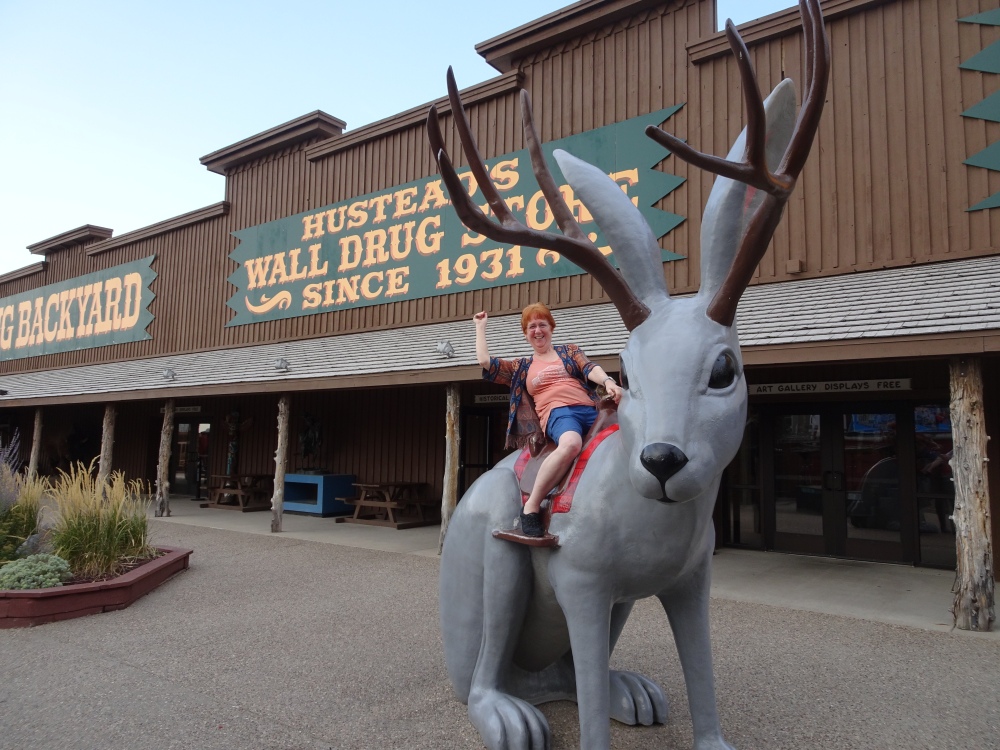 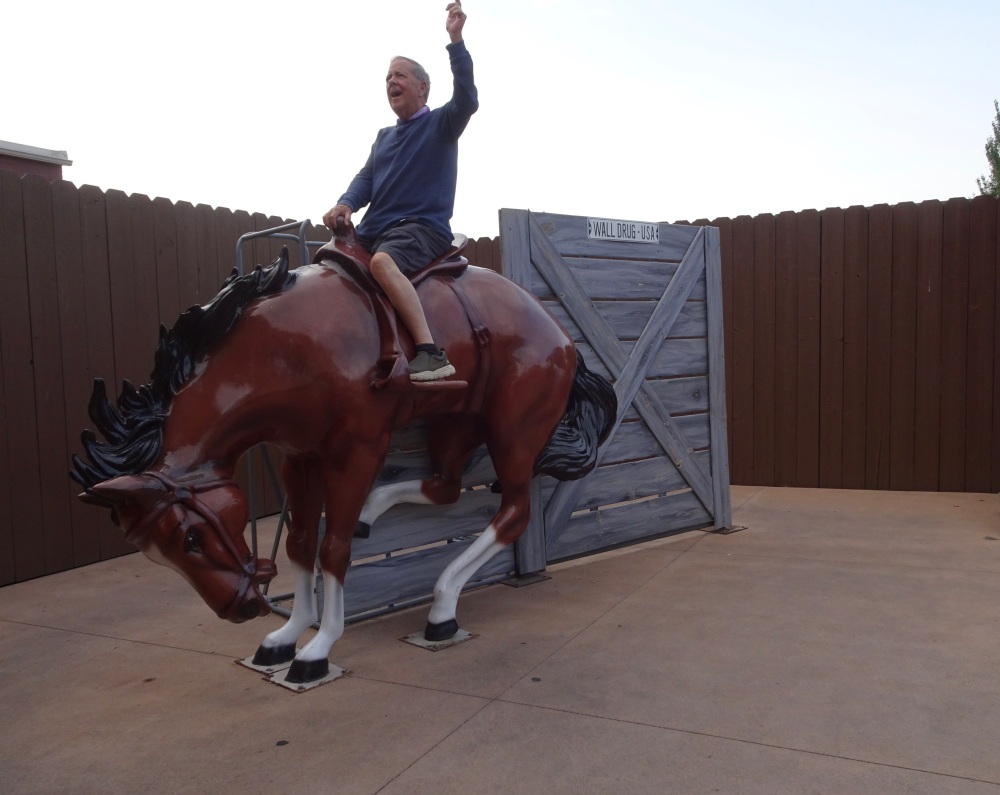 The next morning we took the Bad Lands Loop out of Wall.  On the Loop Road you can drive into the Bad Lands where they have multiple scenic overlooks.  The Bad Lands National Park displays sharply eroded buttes and pinnacles.

We also had the opportunity to see wild life in the Park.  Because the Bad Lands also has the largest undisturbed prairie plains there were lots of Bison.  You’ve seen enough photos of them so I will spare you yet more photos of Buffalo.  However we did get to see the Big Horn Sheep here in the Park. 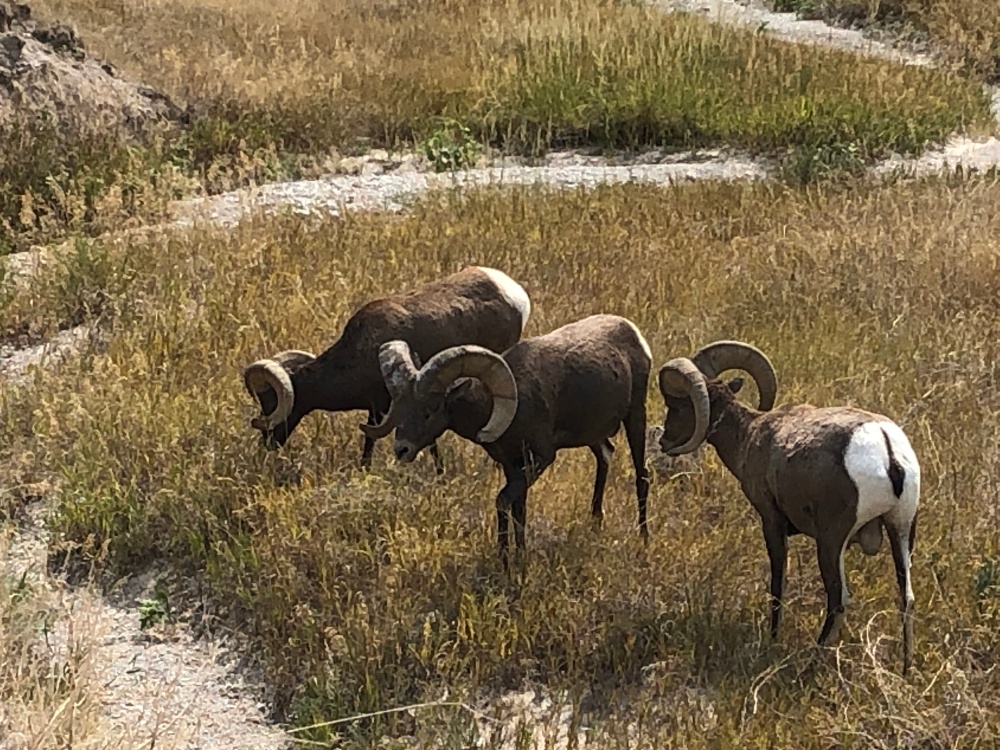 As you exit the Park you are just miles away from the Minuteman Missile National Historic Site.

Jim Boensch gave us our overview at the Park.  He served with the Strategic Air Command at the Launch Control Center her in South Dakota from 1971 thru 1975.  At that time he told us the US had 400 active missiles pointed directly at Russia.

This site preserves the last remaining minuteman II ICBM system in the US and shows the history and significance of the Cold War and the arms race.  Below is the the Delta-09 missile silo and missile . 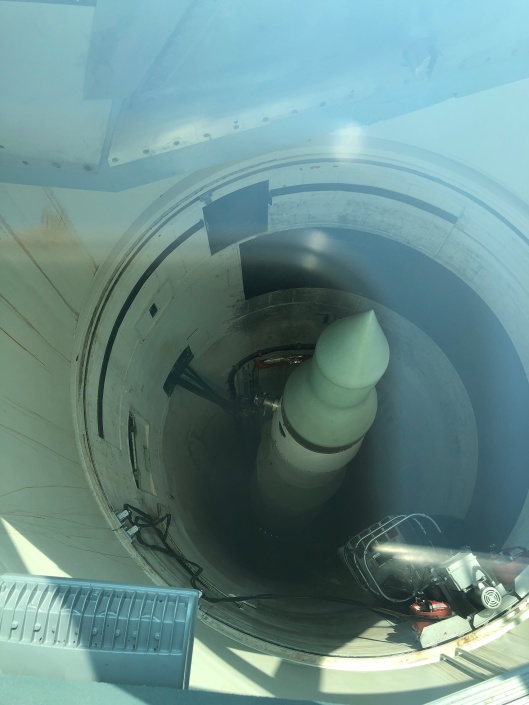 The Delta-01 Launch Control Facility below was actually eleven miles away from the missile silo.

Today 450 of the newer minuteman III missiles are still on active duty in Montana, North Dakota, and Wyoming.

We have traveled nearly 2,500 miles around Colorado, Wyoming, Montana, South Dakota, and Nebraska and are excited to end our two week vacation with family near Denver.  Notice that I am holding the newest family member, Summit. 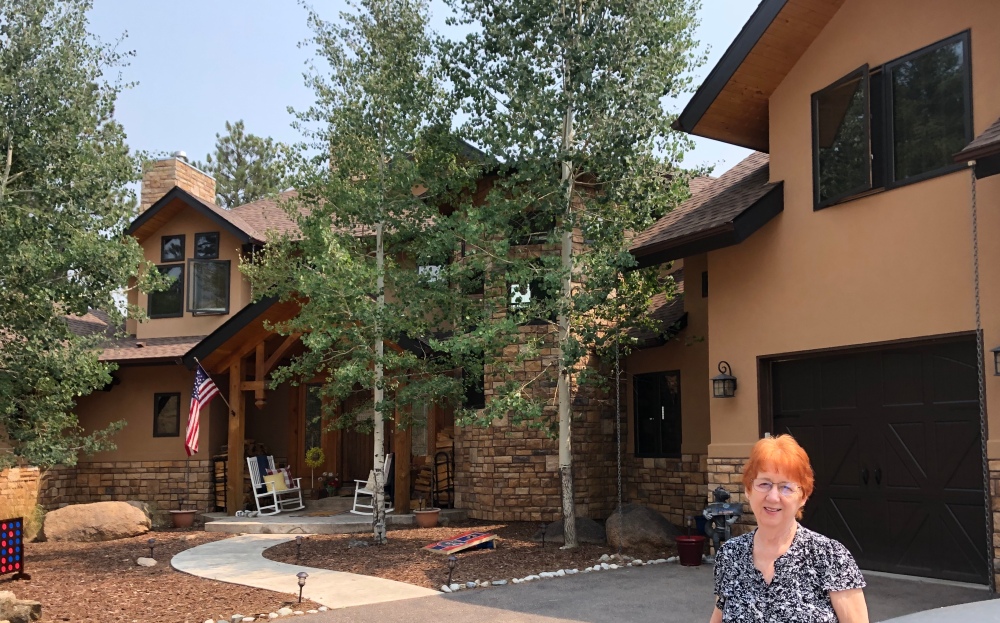 As always we kept the best for last!